Part-time Chilmark resident Ellen Levine combines two career trajectories in a series of paintings that are currently on display at the Chilmark library. Her most recent body of work was created in response to the refugee crisis that is affecting more and more people in places around the globe.

“I felt this need to respond in some way to what is going on at the borders of the U.S. and what’s going on in Europe and the Middle East,” says Levine, who is, among other things, a child psychotherapist, author, and expressive arts therapist whose recent initiatives have focused on displaced families. “I want the viewer to have an experience of this,” she says of her refugee series, “to see the paintings and be touched in some way by them.”

Although the subject may seem dark, the mixed-media works are imbued with a sense of hope. The paintings are essentially landscapes — inspired by scenes around the Vineyard. Onto these painted vistas of sea and fields, Levine has superimposed photographic images of large groups of people — migrants traveling by boat or by land. She sourced these photos of refugees from the New York Times and other media outlets.

“I would see an image that struck me,” she says. “Something that you see and can’t turn the page because it’s too strong, too important.”

The subject of immigration and displacement are close to home for the artist and therapist. As adolescents, her grandparents fled Lithuania and Russia at the turn of the 20th century to escape the pogroms targeting Jews in Russia and the Baltic countries.

Levine’s parents wound up in the Boston area, where they met and befriended another Jewish refugee, the painter Albert Alcalay. Alcalay and his family had just arrived from Yugoslavia, where he had survived a POW camp and subsequently barely escaped persecution by German Nazis and Italian Fascists, and was now on the run. Levine’s father helped his new friend establish himself as an artist and art teacher. Alcalay went on to become an important figure in the abstract expressionism movement in the U.S.

Levine spent her childhood summers with her family on the Vineyard. At age 9 she started taking art lessons from Alcalay, who would retreat to his Chilmark summer home during summer breaks from teaching at Harvard.

Levine never lost her love for painting, incorporating all of the arts into her work as a way to inspire and engage young therapy clients and eventually school groups. In 2006, she co-founded the Create Institute in Toronto. The project, a response to the relocation of 25,000 Syrian refugees in Canada, involves bringing a team of students into public school classrooms to provide art projects for children who have been in migration for long periods of time, and had consequently lost years of schooling. The project, which Levine is still involved with as a teacher, sprang from a program developed by the Canadian government to help Syrian refugee children learn English and catch up with their studies.

Levine has previously shown her work in Canada and Switzerland, as well as on the Vineyard. However, this is the first time that she will be exhibiting the group of refugee-inspired multimedia works, which she began in 2017.

Taking the photos as a starting point, Levine works in a way that British psychoanalyst Marion Milner describes in her book “On Not Being Able to Paint” as “free painting.” This method involves paying attention to the mood of the subject rather than the way in which the subject actually appeared. Choosing peaceful landscapes as settings for her immigrant photos, Levine then adds painted images of means of escape like ladders and windows, along with found objects.

In her artist’s statement, Levine writes, “I played with materials, and without knowing what would happen. In this process, I discovered ordinary materials in my studio, and experimented with gluing them onto the surface. I was especially drawn to textured material, corrugated cardboard pieces or bits of plastic and sandpaper. I embellished them to resemble ‘treasures’ or precious objects.”

The end result is a set of 18 images of hope and resilience despite extraordinary odds. In an article she penned for a literary journal, Levine writes, “People are traveling the earth, displaced by climate changes, by wars and by violence. At this point, there are more migrants, refugees and asylum seekers than there were after World War II. By mid-2020, 80 million people were displaced worldwide as a result of conflict, persecution, human rights violations, and violence.”

Levine describes her ongoing series as “a response to a call from the world.” She has included a number of immigrant stories in the exhibit, which she hopes will help raise awareness of a very real and all-encompassing issue that is affecting people throughout the world today.

Ellen Levine’s work will be on display at the Chilmark library through June 29. 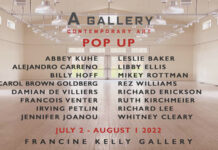