“Imagine: Celebrating Black Female Creativity” is sure to be an important, must-see exhibition this summer. The show — rich with painters, photographers, sculptors, and artists working in collage, prints, mixed media, and textiles — will hang at Featherstone Center for the Arts’ Francine Kelly Gallery, a perfect, light-filled venue to accentuate this splendor of imagination. The show is the brainchild of Adrienne L. Childs, who has been celebrated for her work on Black artists of the 20th and 21st centuries. She serves as an adjunct curator at the Phillips Collection, and associate of the W.E.B. Du Bois Research Institute at the Hutchins Center for African and African American Research at Harvard University, and is the winner of this year’s David C. Driskell Prize — an annual award for individuals who push African American art and art history in new directions.

Childs was originally asked to curate an exhibition of two accomplished artists in segregated Washington, D.C. — Lilian Thomas Burwell and her aunt, Hilda Wilkinson Brown, who, as it happens, had strong ties to the Vineyard. Childs, who has 40 years of connection to the Island herself, thought about the fact that historically, the Vineyard was a sanctuary where Black artists could come and thrive. She decided to look more broadly at Black women artists with Vineyard ties, and then to invite others from all over, in order to create an exciting dialogue among the works, all celebrating Black female creativity. The resulting show is a mixture of old pieces from artists who are no longer with us to new works from those who are living, ranging in age from 30s into the 70s — and a wonderful selection from Burwell, who is in her 90s.

Although there will be a variety of subject matter, Childs says, “One of the things I noticed is that there is a great deal of representation of Black portraiture flourishing, and it is decorative, effervescent, and colorful. It’s an expansive view of the Black body. I look at this phenomenon as dislodging portraiture from pain.” In overturning this notion of beauty, Childs feels that it is almost surreal at times. The older women tend to be more realistic in their rendering and, thus, there will be a mixture of figurative and abstract art. Childs points out that even some of the photography is abstract, and she likes the way these pieces are in conversation with some of the abstract painters. The show will not be separated into discrete sections divided by media, but rather hung to create dialogues among them that get us thinking about their connection.

About developing this so-called conversation, Childs says, “Hanging the show is the most fun because it is a creative act.” She adds that curating, or selecting the pieces, is also a creative process. Childs adds, “You choose them, and if anybody else comes in and curates the exhibit, the show will look totally different. It’s a creative act on top of a creative act.”

Recognizing the momentum in looking at the achievements of Black women in literature and film, Childs believes this show will garner a lot of interest. Likewise, noticing how we get such great literary and musical presence on-Island, she believes, “We can start attracting visual artists of the same caliber here.”

Regarding the show’s title, Childs shares, “I wanted to think about what all the women have in common aside from their race and what they are doing. They’re imagining. And I think the word opens it up, doesn’t limit it to any one thing. It’s also how do we imagine ourselves, our environment? How do we use our imagination to heal, to understand history, to project into the future? How do we imagine our loved ones?”

Most of all, Childs emphasizes, “I want the exhibition to be fun. That’s why I call it celebrating Black female creativity — because it is the one thread through all these artists who have been working and are still working. This will be all the ways that Black women have been creating since the early 20th century. There are so many different directions this work goes in, and I’m celebrating all of them.”

“Imagine: Celebrating Black Female Creativity” at Featherstone Center for the Arts. Opening reception on Sunday, August 7, from 4 to 6 pm, and running from 12 noon to 4 pm through Labor Day, Sept. 5. 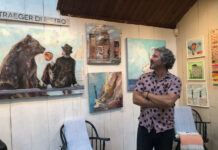 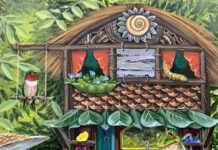