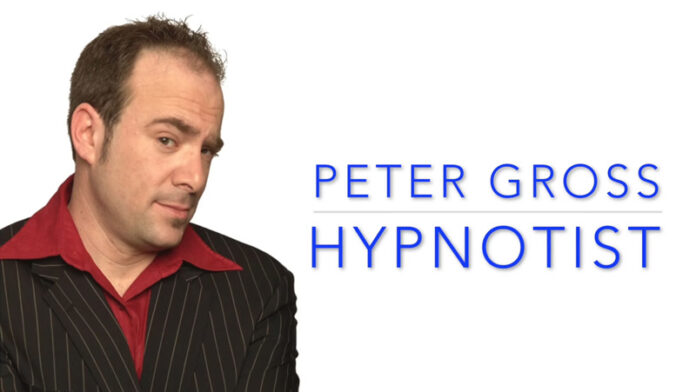 When Peter Gross appears at the M.V. Film Center on Saturday, August 13, get ready for the magic world of hypnotism. “Each time I walk on stage I have three goals,” he said in an interview last week. “To entertain the audience, to impress the skeptics, and make my clients look great!”

“I love interacting with people,” he adds, and that’s exactly what he does for the one night he’ll be at the Film Center. “You are literally playing with people’s lives,” he says, but it’s in a good and comic sense.

Gross works with 20 people from the audience willing to come onstage and be put in a hypnotic trance. The trances will turn them into confident, creative, and inspired people. Once they enter the hypnotic state, he says crazy things happen. “We walk through our lives, then we change those perceptions,” he says. “For instance, we can make them count differently.” Instead of “one, two, three, four,” people in a hypnotic state will insist on counting “one, five, three, seven.” And individuals with a fear of needles are freed from their phobia.

His company is called The Boston Hysterical Society, and he has invented “Mental Expresso,” a video workshop especially relevant in the COVID era that refreshes attitudes around a project or personal problem.

“That’s why clinical hypnosis works,” Gross says. “Comedy is the goal. It’s interactive. Hypnosis is the vehicle.” He describes it as an extraordinary experience, and one in which some people prefer to stay hypnotized because it feels so good.

After spending 18 years as a comic magician, Grant spent eight months in Las Vegas training to become a certified hypnotist. He was advised that the moment he returned to New England he should do his first show. He did that at the Ultimate Kronos Group and says it went “fabulously well.”

In case Gross seems like an unlikely candidate to intrigue an audience, it’s worth checking out his resumé. He has visited every continent in the world except Antarctica. He has been on all the major cruises, as well as at companies like Anheuser Busch, McDonald’s, Intel and Merck. In addition, he has performed at Harvard, Yale, and Brown Universities. This will be the first time he’s appeared on-Island at a ticketed event, but he has performed here before in private performances.

“No one should feel reluctant to come,” he says. “People should feel free to come and relax.” It’s worth remembering that Gross offers comedy to the audience. Imagine seeing a shy person suddenly singing like Elvis Presley, and the more the audience applauds the more he writhes and wiggles à la Elvis. Or watch a group of hypnotized people talking to celebrities through their shoes. Gross only works with willing volunteers. “No one should be reluctant to come,” he says.

For more information and tickets for the show, visit bit.ly/mvfshypnotist.