Heard on Main Street: I do my best. I let go of the rest.

It’s good the Lyme disease project has started. But what about West Nile virus? A number of years ago, I had a huge turkey fall out of a tall pine tree, where it had been for a day or so. I wasn’t sure if it was dead or sick, or what. I was told to put a snow shovel in a garbage bag and scoop the bird into another garbage bag and put it in the trash. It took me a few days to get brave enough to do that, but I did.

The guy who instructed me said the bird was probably killed by West Nile virus. At that time I didn’t realize that the disease was carried by mosquitoes. I know he implied it was just prevalent among birds. I probably called the board of health, but have no idea whom I spoke with.

The Vineyard Conservation Society wants to remind you that you can refill your water bottle at 20 water bottle refill stations across the Island, with more in the works, thanks to its Take Back the Tap program. These machines provide chilled, filtered water — not just for free, but also more quickly than buying a bottle. Thanks to an anonymous donor, refill stations were first installed in all of our schools, and more recently in other high-traffic public places. There’s a map on its website. Did you know that two new combination water fountain and bottle-filler units just opened up at Veterans Park in our town?

The fair was again a marvel. I was astonished to learn that half the new T shirts were sold on the first day, and that there were an awful lot of tees of Ag Fairs gone by that were sold at a very low price, and very popular. Also several quilts of those older tees were made by members to benefit the Ag Society, and were successfully raffled off.

Susie Bowman deserved a special award for her glorious sunflowers, but also for the clever additions, making her entry obviously a tribute to this year’s poster.

Recently I was made aware how much I watch television. Last week my set suddenly announced it had a problem, which even my clever son could not fix, at least not from afar. Xfinity gave me a date about 10 days away when someone would come and look at it. Of course, that never means “fix it,” just look at it. There was no way to ask that they bring what we’re pretty sure is needed. But then they changed the date to a few days earlier, just over a week away. So now I wait.

Have I mentioned that I have very little patience? That includes viewing TV programs on my computer — so I’m surviving, if not enjoying it as much.

I was already avoiding most news, so that part was easy. All this has forced me to do some much-needed sorting out of papers piled up in stacks for my attention. If I were polite, I’d admit these things have long needed my attention. I can’t blame TV for putting it off. I’ve also been reading a lot. A very good friend has been wonderful about picking up library books for me since I was in hospital, and also returning them.

She’s taking a much-awaited break soon. No, not just from me, but it is time to ask someone else.

Many folks have offered to help, but I was hesitant to ask. Someone suggested I should let them know, because they wouldn’t offer if they didn’t mean it. So I hope to do better.

It would also be difficult to list all that others are already doing to make my life easier. I’m now starting PT at the hospital, to try to get me moving more. But faster is definitely not in the cards, at least not yet.

Heard on Main Street: You do know that going to church doesn’t make you a Christian, any more than standing in a garage makes you a car.

If you have any Tisbury Town Column suggestions, email Kay Mayhew, tashmoorock@gmail.com. 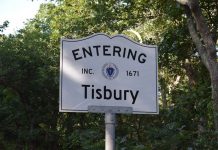 Tisbury: Too many books, and ‘Personal Writing