Beth Parker’s exhibition at the West Tisbury library is not quite like anything you have ever seen. What you’re looking at is hard to place, because it isn’t of this world, but rather one of Parker’s endlessly inventive imagination. Parker, who purposefully never titles her works, leaves them wide open for interpretation. Some pieces look like they might be from outer space with alien creatures, others seem as though you have jumped into a fish tank with tiny proto-beasts swimming in a bizarre underwater garden. Or maybe they are snapshots of the primordial ocean. Parker intentionally keeps her beings’ expressions neutral, saying, “It feels right, open to interpretation.”

“Lots of things flit through my mind as I paint — outer space, underwater, alien aquariums, sci-fi rush hour,” she says. “The Big Bang, floor sweepings, junk DNA, virus fragments, microscopic views of beach sand or household dust. Creatures on the move, running away, running toward. I don’t have names for these characters and abstract forms. Just these guys and those guys. Creatures not ruled by gravity.

“Ultimately, the painting, rather than some notion of what it depicts, determines the next move. The paintings of all my phases, to me, are landscapes. Of somewhere.”

The artist has worked in this style for decades, with the same basic forms showing up since she was in her teens. They ebb and flow, peek out from below, emerge from, or swim between odd, organic matter. Some images you see repeated over the years, others are unique to a particular painting. The curious species tend to migrate across the canvas left to right, with an occasional outlier sneakily showing its independence.

Parker uses various backgrounds such as those with a central spiral, while the more recent ones look like hundreds of tiny bits of confetti that have exploded, flying out with centrifugal force. Parker says about this new, more detailed direction, “These slowed me down quite a bit. These specks and spangles are sort of a mosaic, and are really pleasing to work with.”

She creates her either blue- or pink-palette paintings with acrylics and sealed pastels on canvas. Parker begins by laying down the background with a lot of different color pastels, which she then washes over with a clear medium and a little bit of gesso. Then Parker creates her wild kingdoms. Sometimes she starts with an idea, and sometimes not. “Often it doesn’t really work out the way I thought, and sometimes it does,” says Parker. It’s easy to believe this as your eye gets lost in the tiny details, and more and more surprises reveal themselves in this fantasy world.

Parker paints daily — winter, fall, spring, or summer. She says about her time studying at the Corcoran School of Art, “I was trained well. It was, Get in there. Don’t wait for inspiration, or until you feel like it. If you work every day, stuff happens, and you are involved and excited about it.”

Whereas you have to step back to take in the entirety of her larger canvases, which might be 30 by 30 inches or 32 by 32 inches, the show includes a set of small pieces Parker makes with pen and ink and watercolor. Her minute penpoint stippling beckons us to come in for a closer look to see her amazing workmanship. She created these smaller versions on her trips to Puerto Rico while sitting on the beach.

Whether the work is large or small, surrounded by her prolific output, Parker says, “I just paint them. Put them out there, and my job’s done.” The result is an inviting show that will spark your imagination and tickle your eye.

Beth Parker’s exhibit will be on display at the West Tisbury library through the end of September. For more information, visit bit.ly/parkerart. 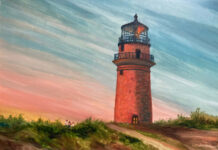