Falls among adults 65 and older caused more than 34,000 deaths in 2019, making it the leading cause of death for that group, according to the Centers for Disease Control and Prevention. Elder adult falls cost $50 billion in medical costs annually. One out of five falls causes a serious injury, such as broken bones or a head injury.

But fear not — falls are preventable. Overcoming the fear of falling can actually prevent falling. That’s a major lesson of Matter of Balance (MOB), a nationally recognized fall management program, originally brought to the Island back in 2015 by Kathleen Samwaysm, PT DPT at Island Health Care. The program is now newly offered by Healthy Aging M.V. in cooperation with Island Councils on Aging. Studies show that a change in attitude can actually reduce falls. Many older adults experience a fear of falling. People who develop this fear often limit their activities, which can result in physical weakness, making the risk of falling even greater.

In addition to teaching participants how to overcome fear of falling, the program provides strategies to prevent falling, how to fall more safely if you do fall, and improve activity levels. The first eight-week MOB series kicks off at the Anchors, the Edgartown Council on Aging, on Sept. 29.

While Martha’s Vineyard Hospital bills physical therapy at over $100 an hour, MOB is free. The Matter of Balance program uses a lay leader model, with trained volunteers delivering the program instead of healthcare professionals. Therefore, it can be offered more frequently, reaching a significantly higher number of older adults.

The program has been scientifically shown to work. A Matter of Balance is an evidence-based program (EBP), so you can count on it as being more than just someone’s “good idea.” It’s a good idea that’s been tried by a statistically significant number of participants, and the results have been analyzed by professionals who have found it to be effective — meaning that if you put in the effort, the chances are good you’ll achieve the desired results.

Participants from previous MOB classes were full of praise in their written evaluations of the classes, according to a story by Pat Waring a few years ago. (See mvtimes.com/2018/11/14/master-of-balance.)

“It’s been wonderful. I wasn’t aware of all the movements you could do to improve,” said Dominick Vecchiarella, a New Jersey visitor, attending with his wife Lucille. “They cover the whole body, which is important. It’s really helped me. I’m glad I came.”

Vecchiarella had suffered a fall recently, and was able to employ techniques he learned in the class to lessen the severity of his injury.

Other students completing evaluation sheets had rave reviews for the program, the instructors, and benefits they received.

“No matter where you’re at in terms of physical health, you can learn more things,” one participant wrote.

“How to plan and strategize for my activities … Think positively about fall risks … Be aware of surroundings … Assess any risk that may cause a fall and remove …” were among the takeaways.

“Plan ahead, pay attention, be more confident,” was how one participant summed up the valuable lesson learned. 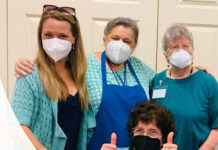