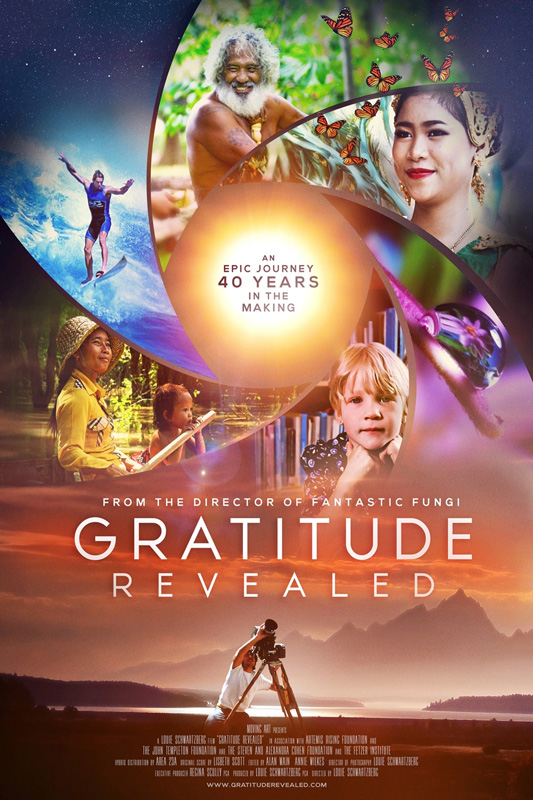 “Gratitude Revealed” continues playing at the Martha’s Vineyard Film Center on Thursday, Oct. 6. A good place to start with this unusual documentary is the dictionary definition of gratitude: “The quality of being thankful; readiness to show appreciation for and to return kindness.” “Gratitude Revealed” takes the meaning even further, exploring the many ways the concept is seen and explored by a variety of people. It is written and directed by the awardwinning Louie Schwartzberg, who is also responsible for the time-lapse documentary “Fantastic Fungi.” “Gratitude Revealed” begins with Schwartzberg making tea with lemon and reminiscing about his parents, who were Holocaust survivors. In fact, his mother survived six years in Auschwitz. He learned about gratitude from them and their appreciation of the little things in life. Since then, he’s spent 40 years filming, especially focusing on those who have overcome adversity and have gone on to have hope.

The first person Schwartzberg interviews is Benedictine monk David Steindl-Rast, who grew up poor in Austria during World War II. He describes a single day as a gift, to which the only response is gratefulness. “We are all born with an openness for mystery,” he suggests. If his words seem easy to discount or ignore, the images that accompany his voice-over are positive and even beautiful.

The viewer starts to get more interested with the next discussion, as the focus begins to shift to curiosity, and the documentary shows images of children, where, the interviewer suggests, curiosity begins. Then a boy connects imagination as a necessary ingredient for curiosity. From there, the film introduces the concept of knowledge, as described by David Steinberg, Canadian comedian, actor, writer, director, and author, who continues the discussion, from dancing to flying airplanes, and turning found metal objects into animals. Next, the film heads to author and activist Paul Hawken, who discusses children’s minds and their connection with innovation, describing it as coming from their ability to connect with things in novel ways. The film offers an example of this in the process of catching lobsters as it compares with teaching.

Film producer Brian Grazer continues the discussion of curiosity, saying he has to ask questions that will challenge them. “Wonder is the gradual satisfaction of curiosity in a beautiful and surprising way,” says Anderson.

The next commentator on wonder, delight, and humility is Deepak Chopra, who says loss of hubris and confusion lead to gratitude. Schwartzberg suggests the many feats or places that are connected to a sense of wonder — the extraordinary talents and gifts or scientific discoveries that push the boundaries of comprehension. “Wonder and awe allow us to transcend the ordinary,” Schwartzberg says. “Wonder allows us to open our minds to gratitude.”

“Gratitude Revealed” continues its examination of gratitude, enriching the concept through its many conversations. Wedded to gratitude are a splendid array of images that help to explain what gratitude is.

Information and tickets for “Gratitude Revealed” are available at mvfilmsociety.com. For information about films playing at Edgartown Cinemas, go to entertainmentcinemas.com/locations/edgartown.