Paula Rae Hollis, 63, of Vineyard Haven, passed away peacefully, with her family by her side, on Friday, Oct. 14, 2022, following a short and courageous battle with glioblastoma. 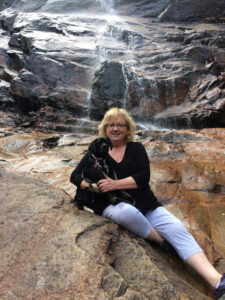 She was born on Nov. 29, 1958, in Bellefonte, Ky., a daughter of Margaret (Horsley) Marshall of Flatwoods, Ky., and Earl Ray Marshall. Paula was raised in Greenup, Ky., and graduated from Greenup County High School in 1976. She received her bachelor’s and master’s degrees in social work from the University of Kentucky in 1982 and 2014, respectively.

Most of her adult life was spent in Lexington, Ky., where she worked many years as a customer service representative for Computer Color Corp., before finding her true calling as “Social Worker Paula.” This led her to roles at University of Kentucky Healthcare and KVC Behavioral Healthcare. In 2016 she relocated to New England to be near her sister. Her daughter, Kirsten, joined her a year later. This transition broadened Paula’s career to include jobs at Compassionate Care Hospice in Londonderry, N.H., and Village MD and DMC Primary Care, both in Derry, N.H. She also worked part-time in case management at Exeter Hospital in Exeter, N.H. During her time in New Hampshire, she completed her LICSW, an accomplishment that she was very proud of.

While in Lexington, Paula became heavily involved in refugee settlement missions, which opened her heart and doors to becoming “American Mom” to Peter, Philip, and John Manga, brothers from the Democratic Republic of the Congo. Her love and support for them spanned middle school, high school, college, and beyond. She dedicated her life not only to the boys, but to the entire refugee community, where she worked tirelessly as an advocate within the school system and various organizations to generate support, money, and material donations needed to integrate them into a new culture while helping them maintain their own cultural identity. She was the No. 1 fan on the soccer field, and the keeper of the famous “snack box” that could be found located outside her door. Everyone adored and appreciated “Miss Paula.”

In September 2020, Paula moved to Martha’s Vineyard, where she assumed roles as a LICSW, followed by behavioral health manager at Martha’s Vineyard Hospital. While Paula often joked that her sister “dropped her off at summer camp, and never came back to get her,” Paula treasured her time on the Island, where she enjoyed many walks on the beach, hikes in Menemsha Hills, and dinners out with friends. She thrived in her work there, and truly impacted the lives of many.

Though Paula’s life was cut way too short, her legacy will live on for many years to come. Her friend network was endless, and everyone who came in contact with her was truly made the better for it. She loved life to the fullest, and was infinitely proud of her children and grandchildren. She had just returned from a two-week trip to England, where she embodied the role of “Mimi” for Addison and Isla. We will all miss her crazy humor, her boundless energy, her radiant personality, her generosity, her laughter, her strong faith, her love for the ocean and all things Kentucky, and most of all, her devotion to her family.

In addition to her mother, she leaves behind two daughters, Ashley Parker and her husband Dan, and their children Addison and Isla of Preston, East Yorkshire, and Kirsten Hollis and her partner, Clayton (HB) Jervis of Exeter, N.H.; her brother, Jon Marshall and his partner Penny Tharp of Catlettsburg, Ky.; her sister, Julie Brooks and her husband Ted of Hampton Falls, N.H.; and two nieces, Morgan and Lily McGinnis. In addition to her father, Paula was predeceased by a sister, Johanna Lynn Marshall.

Celebrations of her life will take place on Nov. 2 at 92 Main St., Vineyard Haven, from 4 to 8 pm. Relatives and friends are respectfully invited to attend.

In lieu of traditional remembrances, consider becoming involved in your local refugee ministry.

Assistance with the arrangements and cremation was by the Remick & Gendron Funeral Home-Crematory, Hampton, N.H. Please visit remickgendron.com to view Paula’s memorial website, or to sign her tribute wall.