‘Tis the holiday season, and nothing says Christmas quite like fragrant, green, decorated wreaths. Whether indoors, outdoors, or on doors, these beauties can vary from simple to complex, with lights, candles, bows, and ornaments of all sorts imbuing them with a sophisticated or humorous air.

This Yuletide tradition has ancient roots. Encyclopedia Britannica and an article on Time Magazine’s website supply a wealth of information. Apparently, ancient Egyptians wore bands of interwoven flowers around their heads as a fashion statement. In ancient Greece, wreaths were given to winners at the Olympic games and to orators and poets in competitions. On a more personal note, a lover might woo his beloved by hanging one on their doorway as a sign of affection. Later, in ancient Rome, laurel crowns were given to honor victorious warriors and statesmen — just think Julius Caesar.

But wreaths also had religious significance in the ancient world, appearing in Greek and Roman mythology, fashioned into the shape of rosaries during the Middle Ages, and worn by nuns on their heads to signify joy the day they professed their religious vows in 18th-century Mexico.

The wreath’s association with Christmas is credited to the Germans at the beginning of the 16th century, when they began the custom of bringing trees into the home and fashioning wreaths from the resulting pruned branches. The Time website tells us that they are a representation of faith, as Christians in Europe often placed a candle on the wreath when they are lying flat during Advent to symbolize the light that Jesus brought into the world. This evolved into four candles — one for each week of Advent, a tradition adopted in northern and eastern Europe in the 19th century, and eventually migrating to Britain and the United States.

If you want to try your hand, the first step in making them is to create a circular form and, in fact, the term “wreath” comes from the word “writhen,” which in old English means “to writhe” or “to twist.” According to the World of Christmas website, the use of evergreen branches was influenced by the Egyptian, Chinese, and Hebrew cultures that believe they are a symbol of eternal life. Their sturdiness, of course, is a plus because you bend and weave them together on a “blank” wire wreath frame, securing the greens with thin gauge wire. Wreaths range from 10, 12, 14, or even 24 and 48 inches in diameter. You can buy bows that already have wires on them, making them easy to attach. From there, your only restriction is your creativity and where you are going to put your decorations.

If you want some guidance, Donaroma’s in Edgartown is having its annual wreath-making workshop on Saturday, Dec. 10, from 10 am to 4 pm during the Christmas in Edgartown celebration. Mariko Kawaguchi of the Donaroma’s floral department shares, “Back in the day, the workshop was one of the few places where natives, visitors, and washashores all came and worked together. It was a really nice melting pot.” While the Island has a lot more visitors during the holidays nowadays, the sense of community persists.

The event has been a favorite for years for those who need no instruction, and they will often lend their 20 to 25 years of expertise to novices. Staff members circulate to help with instructions and advice, including how to bring what you have in your head — or seen on the internet — to life.

The event is also traditionally a blast for individuals and families with young children. You can come in, complete your project and leave … or stay for the day with a coffee or lunch break in between. While you don’t need reservations, they recommend that you call with a head count of your party so they can gauge how much material to have on hand. With a limited supply of clippers, it’s good to bring your own, if you have any and, of course, any special decorations you might want.

There will be three options. Kawaguchi says “The dry wreath of balsam is the fastest one to make — add a bow, some berries, pinecones, decorations, and you’re done … and you can make it to the parade.” Sue Weyl, also of the floral design department, says another option is a boxwood wreath, explaining, “You create these out of boxwood greens, and it comes out looking like a little Christmas tree. Or you can do a wet wreath, which is probably the most labor-intensive project.” You start a wreath frame that has plastic tape wrapped around moist moss. You poke your greenery and decorations into this wrapped “moss sausage,” making something quite intricate. “Those wreaths are very time-consuming, but they’ll last for months and months. They can last through Valentine’s Day,” Weyl says.

Kawaguchi recommends that beginners keep it simple, as it doesn’t take much to make a wreath look festive. “Sometimes people get too zealous and then things fall out. It’s about what’s in your head and what you see around you, and we can help you,” Kawaguchi says. “[A wreath] is like a snowflake where each one is perfect for the person who made it.”

If you prefer, you can buy decorated and undecorated wreaths at Middletown Nursery in West Tisbury, Mahoney’s Garden Center in Oak Bluffs, or Morrice Florist in Vineyard Haven. Also in Vineyard Haven is Donaroma’s Eden Gardens, which, starting the weekend before Thanksgiving, will have not just wreaths — including a 6-foot in diameter model — and various attachments, but “swags,” which are three or four evergreen branches tied together that hang down, sporting pinecones and a bow where all the sticks gather.

Of course, once you have your wreath, it’s all about deciding where to place the evergreen creation — on the table, fireplace mantle, front door, or outside … or all of the above if it strikes your fancy. 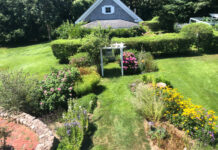 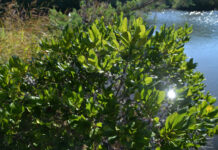 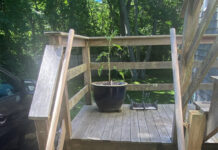