Walter Charles Lison died on Saturday, Dec. 31, 2022, at the Henrietta Brewer House in Vineyard Haven. He was 93. 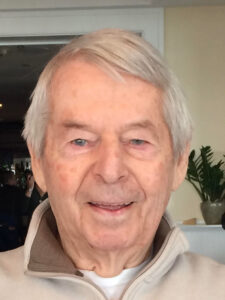 Walter was born and raised in New York City, and began his career in the textile industry in 1947. He was an enthusiastic novice, but successfully climbed to the rank of senior executive at Universal Woolens. He remained an integral member of the management team at this firm until his retirement in the late ’80s.

Early in his career, he met and married Jane in 1951. Their love story continued as they discovered Martha’s Vineyard on their honeymoon. They fell in love with the Island, and continued to summer on the Vineyard until they finally built their dream home in Katama. In late 1992, they moved in full-time, and began their next chapter. They were married for 66 years, until Jane’s death in 2017.

Walter loved the outdoors, especially fishing. He could often be seen cruising the beaches in his green Isuzu Rodeo, or casting a line off Wasque or the Gut. He spent time volunteering as a Courtesy Patrol member on the Chappy beaches, helping those whose vehicles were stuck in the deep sand, helping to clean up the beach, installing spent-tackle receptacles along the beach, and other good deeds for those who traveled over sand. He was proud of his fishing accomplishments, including a memorable award for the largest bluefish caught by a “senior.” He received this special award during the 2005 Martha’s Vineyard Striped Bass and Bluefish Derby; the fish was 11.12 pounds, and he was thrilled. His face would always light up at the mention of fishing, and he could talk to you about it for hours.

Walter is survived by his daughters, Barbara Gubitose and Karen Campbell, and their respective husbands Joe Gubitose and Jamie Campbell; his grandson Jake Gubitose; his granddaughter Kristin Desoto, and husband Clint Desoto; and his great-grandson, Harrison Desoto. He was predeceased by his wife, Jane Lison.

In lieu of flowers, contributions may be made in his memory to Martha’s Vineyard Surfcasters Association, P.O. Box 3053, Edgartown, MA 02539.