With the Jeremy Berlin Trio backing them, an A list of Island vocalists will have fun trying out a jazz-style performance at Pathways Arts at the Chilmark Tavern on Friday, Feb. 3, at 7 pm. You’ll recognize the names, but you may not recognize them as soloists backed by Berlin, along with Eric Johnson on guitar and Taurus Biskis on percussion. Expect some unexpected vocals by Lucas Ostinato, Rose Guerin, Peter Halperin, Johnny Hoy, Darby Patterson, Delanie Pickering, and Allison Roberts.

The folks at Pathways say they’re happy to host their first “jazz night” at their off-season home at the Chilmark Tavern.

“This idea grew from a duo with Jeremy Berlin and Eric Johnson to the full trio, with Taurus Biskis, followed by a nice lineup of singers to sit in for the second set,” says Keren Tonnesen, co-director Pathways Arts. “We love to offer music not often offered in the usual music venues here.”

For Berlin, the idea began to percolate after he and his young daughter Elda made a special musical video in honor of her grandfather’s birthday at Pathways during the pandemic. That opened the door for more conversations with Tonnesen.

“I called her up and said, What if we do a jazz night and make a plan with a house band backing up all these different singers,” Berlin said. “The idea is to present singers people are accustomed to hearing in a different setting, and having them present themselves differently, with a different aspect than they are accustomed to. It popped into my head, and it all came together.”

An accomplished guitarist, Johnson has been joining Berlin on stage for jazz performances for decades now. He says that the singers performing at Pathways have chosen some great tunes that instrumental jazz players would never play without a vocalist.

“My hope is that these talented singers use this as an opportunity to explore more flexibility in phrasing than they may be accustomed to,” Johnson says. “That they have fun with it. Jazz really is incredibly fun to perform. It’s an idiom that requires a certain technical command, but the really special thing is it celebrates being genuine. Being yourself rather than trying to sound like someone else. I’ve worked with most of them, but only a few in a jazz context.”

Berlin explained that the evening won’t consist of a real rehearsed and planned event, because most of the artists are very familiar with performing. He said there will be a variety of songs presented, with Ostinato doing a couple of Brazilian songs, and Patterson performing a song she found on a Chet Baker record.

One newcomer to the stage will be Roberts, who has a beautiful voice, according to Berlin. He discovered this in a roundabout way. Berlin was going to perform at the Center for Living, where Roberts was working, but he didn’t have a vocalist. The folks there urged Roberts to join him and when she did, Berlin said, it was amazing.

“She wanted to sing ‘Smile,’ and she started singing it, and it was so beautiful that I almost fell off my chair,” Berlin remembers. “It really brought tears to your eyes, and I said I’d like to work with you and help you get a repertoire together. She’s really natural; she has perfect pitch.”

Roberts says she’s always loved singing, and was one of those kids who liked to give “concerts” for her family. She was a member of the Minnesingers, but says she never sang at a venue alone in front of people until she met Berlin.

“He invited me to do a jazz show at Featherstone, and to come sit in with the Bluefish at the Ritz,” Roberts says about Berlin. “He’s always been really encouraging and generous with his time over the years. I remember being really scared of doing that first jazz show at Featherstone, because I can get in my head and get intimidated. I almost chickened out, but Gordon Healy said to me, ‘If Jeremy Berlin asks you to do something, you do it! He wouldn’t ask if you weren’t good.’”

Remembering those words of wisdom helps a lot when nervousness starts to get the best of her, Roberts says. “Music is such a powerful conduit for emotion, and to me, singing always feels like a beautiful opportunity for catharsis. It’s become an important way for me to build confidence in myself, and connection with others, so I am always incredibly grateful to be included in something like this. Jeremy has given me a wonderful gift, inviting me into and sharing these spaces with me, so I am very grateful to him.”

The Feb. 3 event won’t be the last of the musical offerings at Pathways. Tonnesen says classical guitarist Douglas Brush is coming up, as well as a night of vocalists performing show tunes.

A night of jazz with the Jeremy Berlin Trio and invited guests, Friday, Feb. 3, at 7 pm at Pathways Arts at the Chilmark Tavern. Visit pathwaysmv.org for more information. 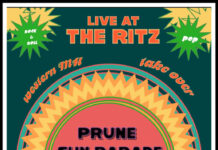 Western Mass. takeover at the Ritz