It sounds like the plot of some sort of adventure movie with an emotional twist. In 1993, having spent 70 days trying to scale K2, the world’s second highest mountain, climber Greg Mortenson got lost on his descent somewhere along the Pakistan/China border, which the mountain straddles. Separated from the other climbers, emaciated and exhausted, he groped his way through Pakistan’s Karakoram range of the Himalayas, a region where Americans are hated, and a stronghold of the Taliban. Even so, the impoverished residents of Korphe, a Pakistani village, rescued him and nursed him back to health. In return, he promised to return one day and build them a school.

As of 2009, Mr. Mortenson has established and significantly supports 131 schools in rural and often volatile regions of Pakistan and Afghanistan where hardly any education opportunities existed, providing education to over 58,000 children, including 44,000 girls.

And another far reaching result of the life-changing experience is the book, “Three Cups of Tea: One Man’s Mission to Fight Terrorism and Build Nations… One School at a Time” (Greg Mortenson and David Oliver Relin, Viking 2006), which has inspired community activism around the country.

The book has been published in 39 countries, listed on the New York Times best seller list for three years, and incorporated into more than 100 college curricula. Locally it has become the impetus for a six-week seminar conducted by Jim Norton at the Vineyard Haven Public Library.

An expert on the people and politics of the Afghanistan/Pakistan region, Mr. Norton will lead a discussion on the difference one person can make, dedication and commitment, the importance of educating girls, empowering communities, and building bridges – literally and figuratively – through the Pennies for Peace Children’s Program, and the Central Asia Institute, both founded by Mr. Mortenson.

Each of the six discussion sessions, which began last week, stands alone. You can attend one or all – each ends with a summary and conclusion. “Participants will help shape the course around their particular interest,” says Betty Burton, the Adult Program Coordinator at the Vineyard Haven Public Library.

Ms. Burton is one of the coordinators of an Island-wide “Three Cups of Tea” school program. “The librarians from the various schools around the Island – Tisbury, West Tisbury, Oak Bluffs, Edgartown and the high school – got together and wanted to do some sort of project that would encompass all of us around some book,” she says. “Then ‘Three Cups of Tea’ came along and it was just a perfect vehicle. So they took it back to their teachers and now those schools are incorporating it into different projects.”

Ms. Burton explains, “This is a K-12 program, made possible by the fact that ‘Three Cups of Tea’ has been made available in several reading levels. There’s a picture book, a young adult reader, and the original adult edition.” She gives credit to Pat Ryan of the Tisbury School for coordinating this Island-wide literary effort, saying, “She really spearheaded the whole thing.”

Librarians are working with school superintendent James Weiss to get career development credits for teachers, in addition to credits for middle school and high school students for this multi-faceted program in which communities extend aid to ones with less means and resources. Taking inspiration from Mr. Mortenson, Ms. Burton says, “All it takes is education and motivation to make a difference.”

Robin Tuck reads “Listen to the Wind” (the picture book of “Three Cups of Tea,”) for children five and older, Thursday afternoons, 3:30 pm at the Vineyard Haven Library. 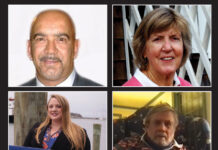