This is a copy of a letter to the Martha’s Vineyard Commission.

Thank you for keeping the record open on the Tisbury Marketplace project. Last week I was on my way back from San Diego by train, and unable to attend or submit anything in writing, but Paul Foley and I spoke about the project, and he very kindly included some of my comments in your material. Some additional comments are listed below.

The applicant has been at great pains to impress you with the environmentally sensitive nature of the application. It is true that the original project in the early 1980s (a very different time) did clean up a messy site, and for that they should be commended. However, that was more than 25 years ago, and regulations, and municipal planning, have changed significantly. Further, although Beach Road has now been sewered, the site is still environmentally sensitive, and nothing can alter that fact. The original project was a very large one, and since then buildings and businesses on the site have been modified numerous times (with permission), sometimes quite significantly. In addition, the businesses have evolved and flourished, and the impacts are now far greater than they were when the project was originally permitted. Now Mr. Dunn would like to add three retail uses (one a token marine use to satisfy the overlay district) and an apartment in a 7,000 square foot building with a third area to be developed in the future. This is unacceptable for the following reasons:

1. The site is reported to be filled wetlands which may mandate certain very stringent considerations; further it is in an area of potential flooding in the event of a major storm. These two factors alone are suitable grounds for denial. To refresh your memories: on the corner of the M.V. Shipyard building, just a few hundred feet down the street, there used to be a line indicating the 1954 hurricane mark; it was well up the side of the building. In a bad storm the whole Beach Street area could be under water. To allow further development in such an area is foolish. It has nothing to do with legalities, it is just common sense.

2. The applicant would substantially increase the use of the existing portion of the site, ignoring the fact that the parking is already inadequate for current use and the current businesses. As shown on the plan, the new spaces designated for parking are inconvenient and inadequately sized, and/or they would block delivery vehicles as well as emergency vehicles. Further, there is no provision for employee parking, and suggesting that they will park two miles away and bus to work isn’t realistic, nor does everyone ride a bicycle. Because of the parking, cars could be attempting to circulate within the site while drivers attempt to find a parking space, and the internal circulation pattern does not allow this, which means additional traffic problems. As this project evolves, with an increase in the intensity of use (and more projected for the future), more parking will be required — of adequate scope and size — rather than less.

3. Four more business units plus an apartment will add more traffic to Beach Road; Beach Road is already overburdened, if not actually “failed.” This is particularly true in summer or any time the Lagoon Pond Bridge opens for marine traffic. Many of us do not shop in Vineyard Haven except in the dead of winter, and the amount of traffic is a significant factor.

4. When sewering was proposed and installed on Beach Road, the premise and the promise was that sewering would be growth neutral. In other words sewering should allow no further density or intensity of use. That concept applies to this project.

5. As the site plan has been laid out (buildings and designated parking areas), access to the southern portion of the lot is restricted, and there is no access to the area occupied by Gannon and Benjamin, a marine business of the sort that the zoning district explicitly allows. How does the applicant propose that G & B will access the section that they are occupying? How will they be able to move boats through the area? How will emergency vehicles access the southern section or the area in back of the current buildings?

6. The green roof, though laudable perhaps, is actually a cynical and laughable perversion of environmentalism. Cloaking a badly conceived and designed project in green does not convey any tangible benefit. Unfortunately, I fear that we will see more of this sort of misplaced thinking where there is an attempt to cloak “in a sort of inverted Robin Hood green” the greed which is an intrinsic part of this project.

I urge you to deny this project for the reasons above, and those expressed by other opponents. 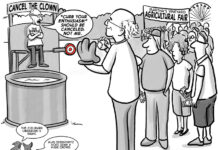 A message to Alan Dershowitz

Searching for the mysterious ferry service