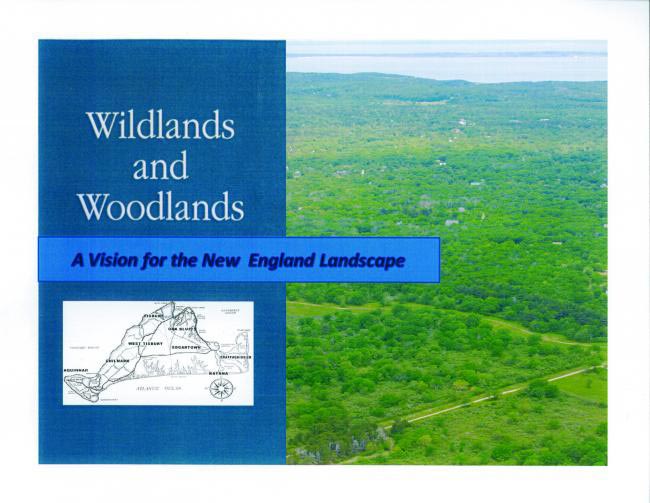 Harvard Forest Director David Foster sounds remarkably chipper for a preeminent conservation expert whose team of 20 noted scientists from across New England just concluded that our region’s forests are on the path toward becoming an endangered species.

He’ll be presenting his group’s findings and recommendations, along with advice specific to the Vineyard, on Tuesday, June 8, at 7:30 pm at the Ag Hall in West Tisbury. Hosted by Polly Hill Arboretum, the evening is sponsored by Bartlett Tree Experts.

While his work is based out of Harvard Forest in Petersham, he also serves as a research associate at West Tisbury’s Polly Hill Arboretum and is thoroughly familiar with the Island’s natural environment and ecological history. He has worked in tandem with all of the Vineyard’s conservation groups.

The newly released Harvard Forest report, “Wildlands and Woodlands: A Vision for the New England Landscape,” a follow-up to the organization’s 2005 study, documents a disturbing trend: following more than two centuries of reforestation, New England is now experiencing a decline in forest cover due to uncoordinated development over the past 20 years.

Forestland, the report points out, supports clean and abundant water, wood and other forest products, a continental-scale habitat, recreation, and a globally crucial source of renewable energy and carbon storage — critical factors in slowing the rate of climate change.

“Wildlands and Woodlands” goes far beyond sounding a warning call. It provides a concrete action plan that can be adopted by communities like the Vineyard to safeguard local resources.

“I plan to give an overview of the report,” Dr. Foster says. “We’ll discuss our goals, efforts, vision and strategy, including how this research wraps into the Martha’s Vineyard Commission’s Island Plan.”

The Harvard Forest team calls for a long-term conservation effort to retain at least 70 percent of New England in forestland, permanently free from development. The report proposes that 90 percent of forests (referred to as woodlands) would be protected from development but actively managed for forest products, water supply, wildlife habitat, recreation, aesthetics, and other objectives. The remaining ten percent, the “wildlands,” would be established as large reserves shaped only by natural forces.

Polly Hill Arboretum Executive Director Tim Boland, a plant ecology and horticulture expert, sees Dr. Foster’s talk as one of the most important events of the season. “He’s a proponent of workable solutions,” Mr. Boland explains. “He encourages conservation efforts along with an understanding that people occupy the planet. He addresses how we can live in a sustainable way, preserving our forests and agricultural lands.”

Dr. Foster sees the Vineyard, Nantucket, and Lincoln as leaders in local conservation efforts. The challenge, as he sees it, is to pull all the towns, larger regions, and entire landscapes together. “New England has an unmatched capacity for conservation. Our people, organizations, and resources are unsurpassed in the world. We have a tremendous capacity to achieve long-term goals.”

More specific to the Vineyard, both Dr. Foster and Mr. Boland agree that the Island has a strong conservation ethic, with widespread interest in sustainable activities. “It represents a perfect place to lead the movement,” Dr. Foster says.

The leading cause of deforestation on the Vineyard, according to Mr. Boland, is undoubtedly development. “We’re developing in the wrong places,” he states. “We’re causing habitat fragmentation and an increased abundance of invasive plants.” His hope is that Dr. Foster’s talk will encourage Island residents to learn how to use the forest as a resource but also to preserve it for future generations.

“I encourage residents to get involved in local conservation efforts,” Mr. Boland says. “Go to our natural areas, learn about the environment and develop an awareness of what’s here and why it’s valuable. Take classes offered by our conservation groups and volunteer.”

Educated individuals are crucial to the “Wildlands and Woodlands” approach. It advocates a grassroots effort in which private landowners partner with communities, businesses, regional organizations, and federal, state, and local government to protect our forestland from the economic and environmental stresses it now faces.

And, while Dr. Foster is optimistic that solutions can be created on the Vineyard and beyond, he is concerned about the ongoing construction of extremely large houses distributed across the Island in what he considers a broad way. “This causes habitat fragmentation, alters the historic quality of the landscape, jeopardizes the environment, and causes groundwater contamination,” he says. “There’s a huge need on the Island to develop in a more constrained way.”

Mr. Boland urges Island residents to attend the discussion and to bring questions and concerns. Copies of the “Wildlands and Woodlands” report will be distributed.

Admission to “Wildlands and Woodlands” is $10; $5 for Polly Hill members. The program begins at 7:30 pm at the Ag Hall in West Tisbury. For more information, visit www.pollyhillarboretum.org, or call 508-693-9426.

On My Mind: Strategies for pandemic helplessness

What do you think about trick-or-treating in Vineyard Haven?
#coronavirus #mvtimes #news #marthasvineyard ... See MoreSee Less