A road safety audit brings together a group of transportation experts with a variety of specialties to analyze the problem and recommend a solution. The transportation experts could include personnel from the state DOT and the federal government, as well as town officials, according to Mark London, MVC executive director.

The selectmen made the request following a formal presentation by MVC officials of four design alternatives (available at mvtimes.com) included in a report the MVC submitted to the town in April. The selectmen asked for the MVC study after rejecting two alternative modifications the state suggested in 2007.

“Usually the safety audit team would not be interested in coming down to do a test of a small rural situation, but we have been talking to them and offered this as an exercise for their team,” Mr. London told The Times. The road safety audits are conducted by DOT through the Highway Safety Improvement Program (HSIP).

The MVC study notes that, “Old County Road intersects State Road at an acute angle rather than a 90-degree angle. Combined with current intersection design, this creates an awkward geometry that raises several safety issues.”

Using data provided by DOT, the MVC analyzed the intersection’s accident history and found that there were a total of four accidents during the three-year review period. The intersection crash rate of 0.34 is lower than the average statewide rate of 0.87 and the regional average of 0.66 for intersections without signals. However, the study states, “although the accident rate has been low, there is a concern that the limited sight distance between vehicles heading in opposite directions on State Road could someday result in a head-on crash.”

Mr. London said that while the MVC analysis finds two of the four options presented to be “most promising,” the common denominators of any solutions should include creating a single T-intersection so that drivers heading up-Island would be past the curve in State Road before they must decide to make their left-hand turn and have a clear view of State Road. He also said that the design or geometry of the intersection should be such that “it would be impossible to make the turn staying at 40, 45 miles per hour. You would have to slow down.”

Options number one and three are the MVC favorites.

Option one creates a T-intersection that maximizes the sight distance by locating the intersection west of the curve in State Road. It also minimizes the overall extent of asphalt by allowing a single paved area with a wide shoulder to serve as the road. However, it would eliminate all the existing trees in the island.

Option three moves the T-intersection as far to the west beyond the curve in State Road as possible without affecting the existing trees.

MVC traffic planner Michael Mauro told The Times that he hoped to schedule the road-safety audit between late June and mid-July. The field trip lasts two to three hours and would include five to seven state DOT staff members, MVC staff, and a wide variety of town officials including selectmen, the Department of Public Works, police and fire chiefs, planning board members, and emergency services personnel.

“It would be a huge step getting them here. There has not been enough outreach,” Mr. Mauro said.

Following the road-safety audit, the state or MVC would prepare a report including long-term and short-term proposed solutions for review by all the interested parties. The town could decide to hold a public hearing before the report was officially submitted to DOT.

“The state is not going to come out here and tell us what to do. They may have ideas, but it is about what the town is willing to accept,” according to Mr. Mauro.

At the selectmen’s meeting Wednesday, Franci Desmone suggested town officials post more strongly worded signs and remove as many as 30 trees at the intersection as the “cheapest thing to do.”

Glen Hearn, West Tisbury’s representative on the Land Bank Commission, also suggested that town officials should approach the Land Bank because “taking out a bunch of trees would help” alleviate the public safety issue.

Patricia Waring said that extreme caution was the reason there were not more accidents at the intersection. She said that the crash data may not indicate a problem but “wouldn’t it be a great thing to ask the public to write in about their near misses?”

According to Mr. Mauro, once the town decides on the redesign it prefers and sends its request to DOT there is a three- to four-year scheduling delay at the state. Annually the state budgets between $30,000 and $450,000 for the Island’s needed road work and the simplest T-intersection design with some tree removal might cost between $500,000 and $2.5 million. Therefore the project might need to be undertaken over two or more years, he said.

In other business, selectmen Richard Knabel and Cynthia Mitchell appointed five members to the police chief search committee. Jeffrey (Skipper) Manter, a West Tisbury police officer, abstained from the discussion and the vote. Mrs. Mitchell said that “eight great people volunteered to serve on the committee,” including some people who would be new to public service in town. She said she was “strategically nominating” Bob Wasserman, Faith (Hasty) Runner, Pierce Kirby Jr., David Merry, and Al DeVito. Mr. Knabel seconded the nomination. They asked Mr. Wasserman to call the first meeting, when a chairman would be selected.

The selectmen unanimously appointed Brian Smith to serve out Jim Powell’s term as the town’s representative to the MVC and accepted with regrets the resignation of Eileen Maley, who served as an associate member of the planning board.

The selectmen also unanimously approved the recommendation of the shellfish committee to leave Tisbury Great Pond closed to all oyster fishing, whether recreational or commercial, until September 15. 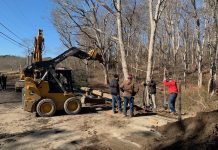