State House News Service — As expanded gambling legislation formally arrived on his desk Monday, Gov. Deval Patrick reversed course on his approval of a single racetrack slot facility and returned the bill with an amendment to approve gambling at resort casinos but not stand-alone slots facilities. What happens next is unclear.

“I am done with that,” Patrick said during a campaign-related press conference in Boston, referring to racetrack slots, his proclamation further rattling the political discord over the legislation that became increasingly apparent in the past five days. Referring to casinos, Patrick said, “Let’s enact what we agree on.”

Patrick added, “I proposed this two and a half years ago. They didn’t act on it then. I’ve told them before they sent me the bill what I would accept and they sent me something I won’t. Now they have another opportunity. I want those jobs too but it’s up to the legislature now to deliver on those jobs.”

Patrick described his decision last week to okay a single racino as a “pretty big step” for him and said it was intended to be incorporated into a compromise bill.

Legislative negotiators filed their complex proposal Friday night and the House and Senate approved it by respective votes of 115-36 and 25-15 on Saturday, prior to the midnight end of formal sessions for the year.

Bill-backers have pressed Patrick to sign the bill but he’s already announced he’ll send it back with an amendment that he predicted would be filed Monday. With both branches filled with expanded gambling opponents and a single member able to block action on any bill during informal sessions scheduled for the remainder of the session, the bill’s dimming prospects appear even darker once the legislation is returned by Patrick.

A meeting with legislative leaders, that Patrick aides indicated on Friday was planned for Monday afternoon, will not be held, according to an aide to House Speaker Robert DeLeo.

DeLeo spokesman Seth Gitell on Monday repeated the Winthrop Democrat’s position that “anything short of Governor Patrick approving this compromise bill represents a decision to kill the prospects of 15,000 new jobs and immediate local aid to our cities and towns.”

Patrick on Monday also repeated his assertion that limiting slot machines to racetracks was essentially sanctioning no-bid contracts. “We do this over and over again in the commonwealth,” he said, pounding his fist on the podium and raising his voice. “We yield to short-term interests of a few powerful people and we set aside the long-term best economic and social interests of the commonwealth.”

The bill on his desk calls for two racinos and limits bidding on those to the state’s two racetracks and two former dog tracks. Senate leaders, who favored a three-casino bill with no racinos but went along with House calls for two racinos, claim language in the bill on Patrick’s desk gives the administration wiggle room to launch casinos without racinos. Senate president Therese Murray has urged Patrick to sign the bill and “declare victory.”

Treasurer Tim Cahill, running against Patrick for governor, on Monday urged Patrick to sign the bill.

“When faced with the opportunity to lend a hand to the working people of the commonwealth by creating and protecting thousands of jobs and infusing billions of dollars into our economy, he is about the throw it all away,” Cahill said in a statement.

Charles Baker, running for governor as a Republican, included Cahill, a longtime casino advocate, with Patrick in his jab at Hill leaders for their “debacle” on expanded gambling. “Governor Patrick, Treasurer Cahill, and their Beacon Hill allies have had their priorities wrong from the beginning, pinning their hopes on casinos to produce jobs while at the same time killing jobs with higher taxes and government spending. Then they can’t even get a casino bill through in three years time,” Baker said in his statement.

Dr. Clyde Barrow, director of the University of Massachusetts-Dartmouth’s Center for Policy Analysis, called on Patrick to sign the bill, saying it would create 10,000 construction jobs and 15,000 permanent casino and racino jobs, while generating $400 million in new state tax revenues and $500 million a year in new “local purchases.”

Formal sessions, the arena for tackling controversial bills like the gambling bill, are over for the year.

Lawmakers wishing to return in a special session to respond to Patrick’s expected amendment need to muster two-thirds of their colleagues to vote on any business. Although a majority of members may call the legislature back into session, it takes two-thirds of members present to vote on any unfinished matters, according to legislative rules.

Senate president Therese Murray has already indicated she doesn’t have the support of enough members to return to session or override a potential veto of the gambling bill, and lawmakers have been wary of breaking their protocol that prevents legislating on controversial matters before and after elections. After seven months of formal sessions this year, August is a time when members plan vacations and begin working on reelection campaigns.

Sen. Ken Donnelly said Monday he would not agree to return for a formal session. Both chambers require two-thirds votes to address Patrick’s veto or amendments. “I’m not coming back,” Donnelly said.

Donnelly said the Senate would likely not be able to muster the two-thirds necessary to consider Patrick’s amendment. Donnelly said he had slept Sunday after two straight late-night senate sessions, but that he expected to field calls from his labor allies urging him to get behind the Patrick amendment.

“I’m sure I’ll be getting some,” Donnelly said after Monday’s brief senate informal.

In a statement released Saturday, Sen. Benjamin Downing said, “I have consistently been opposed to proposals to expand gaming in Massachusetts since my first election in 2006 and this session I have voted against the bill at every stage. If the two gaming conference reports are enacted, and if the governor chooses to veto one or both, I would not support returning in a special session to consider overturning his veto.”

In a statement Sunday, Patrick said, “I still believe that we are best served by no more than three destination resort casinos, where we get more jobs and more revenue, and not by racinos or slot parlors that bring more social harm than they do benefits. I also believe it is wrong to favor the interests of track owners over those of the commonwealth as a whole.”

Patrick said he plans to send the bill back with an amendment “to address these problems.”

He added, “I call on the legislature to accept the amendment promptly so that we can provide the good jobs at better wages and benefits that we all agree are available in destination resort casinos. Had they done so two years ago, when I first proposed it, thousands of workers in the building trades and in other fields would be working today. Let’s not let any more time pass without action.”

On Monday morning, two days after the gambling bill passed the house and senate, the legislature’s website featured an error-riddled draft of the proposal, with no corrected version.

The six lawmakers who negotiated the compromise gambling bill signed off Sunday on 17 pages worth of changes to the bill, including some that erase sections of the bill and another that revises the formula used to distribute the state’s gambling proceeds. The corrections, obtained by the News Service, also strike a section that requires gambling license applications to be public records.

As of Monday morning, the legislature’s website included the lengthy lists of corrections, known as “errata,” but lawmakers were denied the chance at an explanation before the bills passed, and the effects of the changes remain unclear.

A pair of gambling critics sought an explanation during Saturday’s race to pass the bills but were ignored, as Senate president Murray steamrollered the bills through and opted to ignore gambling opponents who raised questions about certain procedural motions. Murray, who has frequently pointed to the senate’s eight days of debate on its original gambling proposal in June, clamped down on Saturday, in the rush to get the bills to Patrick’s desk by midnight, the end of formal business for the year.

Sen. Stanley Rosenberg (D-Amherst), Murray’s point-man on gambling, told the News Service Monday that gambling applications will still be public under language in a separate part of the bill. He also said sections that were struck pertaining to Native American tribes were duplicates of sections included elsewhere.

Although the errata struck a public health fund, Rosenberg said the bill maintains the same amount of public-health-related funding.

On the final night, Murray rammed through orders restricting debate on the final gambling bills to two 30-minute periods. When the bills came up to be sent to the governor, she restricted debate to two 10-minute periods. During those periods, Murray recognized only gambling supporters for the bulk of that time, permitting a gambling opponent to speak at the end of one of the 10-minute periods. As late as Saturday evening, some members, including Sen. Susan Tucker (D-Andover), the senate’s most vocal gambling opponent, were unaware that the conferees had filed any corrections.

Other members said they had difficulty accessing the corrections even after they were aware of their existence. Kathleen Conley Norbut, head of United to Stop Slots Massachusetts, told the News Service she has yet to see a corrected version of the gambling bills.

“Problem being, neither did legislators who already voted on the bill before these errors were identified. They did not have an opportunity to do their job and honor the people’s business,” she said in an email. “The people have no reason to believe that there aren’t other errors in this catastrophic special interest rush-job.”

Shortly after the senate sent Gov. Deval Patrick a final casino bill, the News Service reported early Sunday morning on language in the bill that leaves open whether the commission that would oversee gaming licenses would be required to approve slot licenses at all.

The bill says the commission “may” approve two licenses, but could opt not to. Rosenberg told the News Service that the house constructed the language on slots. He noted that the house’s original bill included the word “may” rather than the word “shall.”

“The house had ‘may’ language relating to the tracks as well,” he said. “It had a little bit of other language that apparently would have made it a little more sure, but the key word ‘may’ was in the original house language.”

That construction, he said, would permit a gaming commission to turn down slot applicants, even if they are qualified.

Rosenberg said that gambling bill negotiators in the house and senate agreed that one staff member from each branch would be present during drafting of the legislation.

“Nobody inserted ‘may’ in a surreptitious way,” he said. 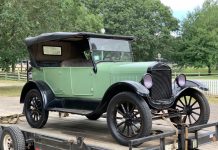 Ag Society gleans a Model T and a big donor 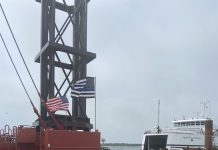 School reopening: We can do better

Ag Society gleans a Model T and a big donor