The West Tisbury selectmen agreed last week on the format for interviews with the three finalists for police chief. The format is arranged to give the two off-Island candidates chances to make a case for how they would fit in with small town, Island life.

Sgt. Rossi has been acting chief since April and is among the three finalists, who include Donald B. Hull, acting police chief in Canton, Connecticut, and Christian Pedoty, a police lieutenant with the Metropolitan Transportation Authority in New York City. They will participate in a community forum at 7 pm on Friday, November 12 at town hall. Selectmen will interview the candidates at 9:30 am, on November 13, also at town hall.

Selectman Richard Knabel described the format in an email sent to each candidate. Each man will have about ten minutes to introduce himself, highlight career achievements, describe his philosophy or approach to police work, and “identify two or three challenges he would face if chosen and how he would address the challenges.”

The two off-Island candidates are expected to describe how previous experience may relate to police leadership in West Tisbury, and how their experience has prepared the candidate to be chief in the mid-Island town. Mr. Rossi would be asked to discuss changes he would make in the department and how he would differ from his predecessor Beth Toomey, who retired in mid-April.

The forum will include a public question-and-answer session. On Saturday, selectmen will interview each applicant individually, and the public will not be allowed to pose questions.

Selectman Jeffrey (“Skipper”) Manter, a West Tisbury police officer, told The Times that he will be seated with the selectman but will not participate in either session.

The cause of contamination of the water coming from a well that serves Town Hall, the Ag Hall, and the former library on Music Street has been solved.

“The contamination incidents were finally solved by discovering that there was a crack in the casing of the well not too far below the surface. That has all been repaired, and the testing has shown that the water is once again pristine and pure,” Mr. Knabel said.

Mr. Manter moved to send a letter to the board of health commending John Powers, town health agent, for “…going beyond the call of duty, way beyond what his job required him to do. Coordinating all the efforts, all the testing, by the well people. I saw him over there watching them and helping them.” Selectmen approved the motion unanimously.

In other business, the West Tisbury board of health asked selectmen for their support of an Island-wide collaboration among all the Island boards of health for a study designed to reduce the incidence or severity of tick borne illnesses on the Island. The boards of health have applied for a share of money made available through a hospital-funded community health grant program.

Mr. Manter said he preferred that a letter of support be submitted rather than a resolution. Mr. Knabel preferred a resolution. The selectmen asked town administrator Jennifer Rand to determine which show of support would be sufficient, and agreed they would sign that document.

The selectmen unanimously approved the request for a letter of support.

In an email to the selectmen, town accountant Bruce Stone touched on the need to review stipends paid to town officials.

“Since I have been here,” he wrote, “there has not been any sort of overall review of what the stipends are or how they should be determined. Some are for elected officials, but some are for positions appointed by the selectmen.”

And, the town holiday party date is December 9, from 5-8 pm in the Ag Hall. 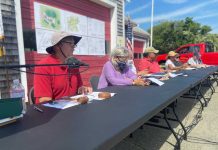 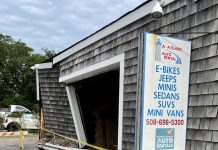