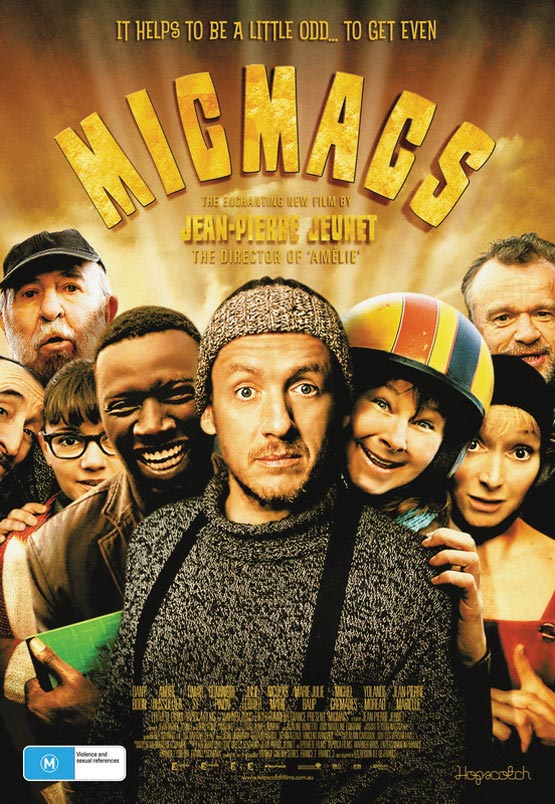 Filmgoers can escape the winter doldrums this weekend by watching two charming cinematic fantasies. “Micmacs” (“Tricks”) screens Friday, March 4, at the Katharine Cornell Theatre, thanks to the Martha’s Vineyard Film Society, and “The Illusionist” will play Saturday, March 5, at the Capawock Theatre.

“Amélie” director Jean Jeunet adds a light touch of politics to his magical storytelling in “Micmacs.” Otherwise, “Micmacs” is a tale framed in much the same fashion as his classic in the genre, “City of the Lost Children,” and it uses many of the same actors.

“Micmacs” opens in the Moroccan desert, where the bomb a French soldier is trying to defuse explodes and kills him. Years later, the soldier’s orphaned son Buster takes a bullet to the brain in a bizarre set of circumstances, and, after hospitalization, he ends up a derelict on the streets.

Soon an eccentric band of junk dealers rescue Buster. Each of the junksters exhibits an unusual and fascinating skill. Elastic girl performs miracles of contortion, while Tiny Pete invents ingenious contraptions out of junk. Slammer launches himself like a missile, and Calculator adds faster than a computer. Mama Chow oversees this whimsical gang and keeps them well fed.

To exact revenge on the arms dealers responsible for his father’s death and his own injury, Buster mobilizes his new friends in a series of madcap adventures. The fun comes in watching the odd ways the group accomplishes its goal and in appreciating the gentle poke at warmongering.

“Toy Story 3” may have won Best Animated Feature at the Oscars earlier this week, but fans of 2003’s animated film “The Triplets of Belleville” will enjoy the distinctive style of director Sylvain Chomet in “The Illusionist,” which was also nominated.

The bonus of Mr. Chomet’s new film is that one of the writers is the late French filmmaker and mime, Jacques Tati. Mr. Tati’s “Mr. Hulot’s Holiday” and “Playtime” are considered classics, and “The Illusionist” is based on a script Mr. Tati wrote in 1956.

Director Chomet fashioned the central character in “The Illusionist” after Tati himself.

Falling on hard times, the eponymous magician of “The Illusionist” lands in Scotland and meets a young girl, whom he takes under his wing, housing her, and outfitting her with fashionable clothes.

The ambiguous, father-daughter relationship between magician and girl reflects conflicting versions of the truth about whom the girl represents. According to the British newspaper “The Guardian,” Mr. Chomet envisioned the girl as Tati’s neglected daughter, while the film company Pathé says she was based on the illegitimate daughter the late comedian abandoned.

Either way, the pleasures of this melancholy-suffused story come through Mr. Chomet’s delightfully distinctive animation. The imaginary worlds of both these upcoming films are reminders that there is life beyond winter’s snow and ice.