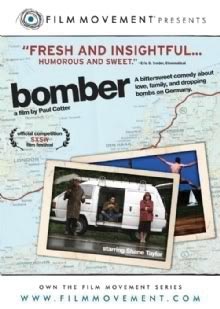 A family road trip turns into a disaster of comic — if hardly epic — proportions in the British comedy, “Bomber,” playing at the Katharine Cornell Theatre on Saturday, May 14, with the Martha’s Vineyard Film Society.

The principals in this comedy of errors directed by Paul Cotter in his feature debut are Alistair (Benjamin Whitrow, whom veteran filmgoers may remember from the 1995 “Pride and Prejudice” miniseries), his exasperated, out-of-work son Ross (Shane Taylor, who played Corporal Roe in the “Band of Brothers” TV miniseries), and his wife Valerie (Eileen Nicholas, best known in this country for “Trainspotting”).

“Bomber” was nominated for a Grand Jury Prize at the South By Southwest Film Festival, where it premiered.

After carrying around an apparently heavy load of guilt from his misguided bombing of a small German town during World War II, Alistair decides it’s time to revisit the site. He is a dyspeptic, emotionally constipated octogenarian who never has a nice word for his son or his wife.

Ross, who hasn’t been able to find steady work after five years in art school, leaves behind his live-in girlfriend, Leslie, to help his parents launch their excursion to Germany. You know things will not turn out well when Leslie reminds him how important it is to get home that night.

Sure enough, Alistair crashes the car into the family garage, and Ross decides he must chauffeur them in his housepainter’s van. Frequent cell phone conversations with Leslie make it clear that she has dumped him as a result, and Ross drops into the doldrums. No matter, Mum says, as if he were a 12-year-old, “Just put on your happy face.”

Always upbeat, Valerie is eager to enjoy a few side trips along the way, including excursions to a rhododendron park and to Warsaw to buy shoes. A grumpy Alistair opposes any such activities, and Ross wants to get home as fast as possible in hopes of salvaging his relationship with Leslie.

Numerous goofy sight gags later, the fractured family arrives in Germany. Alistair finally reveals the point of his visit, but it hardly turns out as expected. His behavior deteriorates from the ridiculous to the absurd as he lingers in the German countryside, trying to make amends.

With the two men in her life perpetually acting like low-level lunatics, long-suffering Valerie finally reaches her limit. Returning to their hotel, she packs her bags and gets ready to leave without Alistair. Fortunately, Ross comes up with yet another list that saves the day.

The key to this understated comedy of manners lies in the conflict between the generations. Ross fancies himself a sensitive, New Age man who favors touchy-feely lists to keep his frustration level down. His parents represent extremes of the two classic British caricatures: the stiff-upper-lip gent who holds back every hint of feelings and the look-on-the-bright side, cheerio, old girl.

Sometimes the jokes are so understated they just seem silly, but when they work, as they do most often with Ross, you’ll find yourself guffawing. And who do you think has the last word?

Brooks Robards, who divides her time between Oak Bluffs and Northampton, is a frequent contributor to the Times.