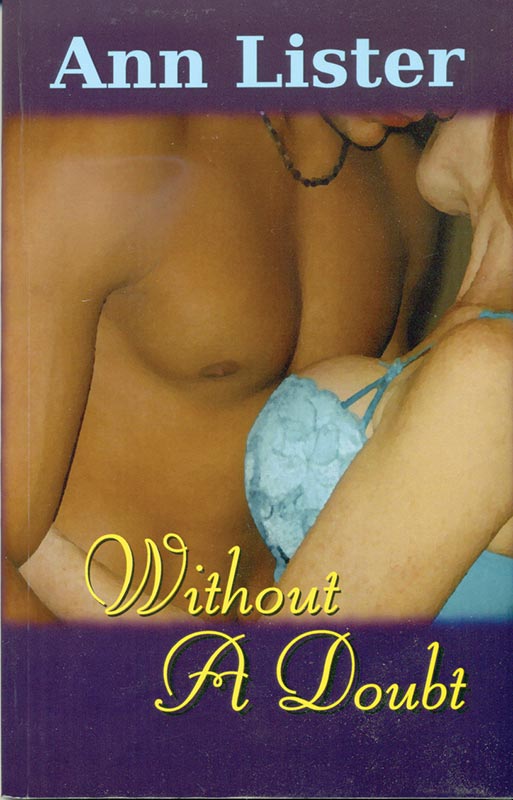 When the editor of the Calendar section handed me this book to review, I goggled at the cover illustration: a photograph of a bare-chested buff young male embracing a slightly garbed woman, whose breast revealed side-on would match a Florida grapefruit.

It’s “Without a Doubt” written by Ann Lister, an Island resident, who wrote the novel, took the cover photograph, and published it. I, too, am a published author, though of books intended for children; some of my earlier unpublished writings more closely resemble Ms. Lister’s work. Hence, my qualifications to review a book that’s intended (mostly) as a beach-read for a readership aged somewhere between 25 and 70 (according to the author).

“Steamy” is a good adjective for Ms. Lister’s writing. After I encountered the first sex scene (on page 36), I considered reviewing the book’s sex scenes and skipping the plot, but that could not have been published in The Times.

Callie takes the ferry and soon encounters a handsome, tall, well-built guy who has the gender specifics that match Callie’s. Several times we visualize Callie’s babelicious booty through Jack’s eyes, though most of the book is told from her perspective.

Through a series of encounters that work as foreplay to the scene on page 36, they warm to each other as Callie settles in and gets to know Jack. He’s a skillful carpenter and wood-carver, divorced (complication) and has slept with many women (complications), and not only is an excellent lover (no complication) but possesses all the feminine-adorable qualities of compassion, tolerance, empathy, and caring that make him an ideal masculine companion.

Jack discovers Callie is still virginal on about page 70. Callie has been writing her books using her imagination, which is as well-developed as her breasts. Love and lust play a merry game of tag throughout. “Loving her was like nothing he had ever experienced and he knew he’d never be the same.”

Soon, however, mental and emotional troubles begin. Otherwise, the book would be over in fewer pages. As their sex life together broadens in experience and modes of pleasure that could add a few how-to’s to the Kama Sutra, they disagree on real and unreal incidents and thoughts, and finally Callie leaves him over a profound misunderstanding. During a year apart in which she and he experience much agony, the rift is healed and their coming together again is mattress-shaking.

Dear reader, they marry and live together on the Island, parenting children to go to school here.

After my wife and I moved to the Island in 2007 we often encountered Ann Lister walking with her two chubby pugs. As she told my wife in a recent conversation, she walked for exercise and to find out what happens next in her stories.

She says she writes the kind of book she has always liked to read. She didn’t like the earlier generation of romance novels (epitomized by Danielle Steel) because they turned off the lights just when the pulses started to pound, and she’s discovered that many women like to read what she likes to write. However, there’s a fine point where she stops adding details, because she doesn’t want a reader to close a book that goes “too far.”

So, Callie and Jack discuss various sexual acts that we don’t experience with them.

Ms. Lister self-publishes her books just in time for the beach season. Such a venture used to scornfully be called “vanity publishing,” but no more. Now it’s a lucrative enterprise for many writers who have left their official publishers. She has a website where she sells her books directly to the readers: signing, sealing, and shipping.

Her book will be “launched” on the Island this coming Sunday from 3 to 6 pm at Seasons Restaurant and Pub on Circuit Avenue in Oak Bluffs. “We go to Seasons a lot and have drinks and watch football and the dynamics of people there, which gives me material to write about. When [managing partner] Mike Santoro heard I was going to have a book-signing, he offered me his place. It’ll be fun.”

Don Hinkle, of Oak Bluffs, is the proofreader for The Times.