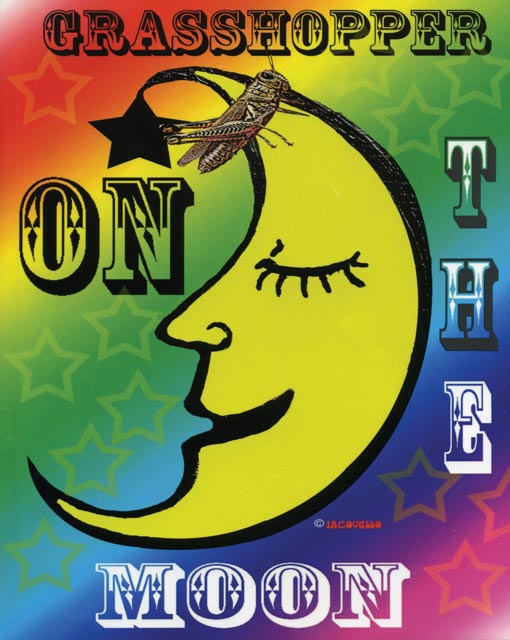 Vineyard Haven resident, Dick Iacovello (the 2004 winner of the Agricultural Fair poster contest), wrote, photographed, and self-published this coloring book for children, dedicated to a young girl, Emmanuelle, or Ubie.

The book consists of a series of photographs, printed on facing pages: one version has a color photo that has been massaged by a computer program that posterizes it (i.e., removes gray tones) and also can decolorize or artificially colorize portions. The facing page has the same photograph reduced to a black and white version that is for the reader to color.

The story is about Ubie, who has a grasshopper friend that she loses.

“All day long Grasshopper stayed with Ubie. He stayed on her arm. She went to the store & she ate her lunch, he wouldn’t leave her arm. When dinner time came, she put him back in the garden and said, Goodnight Grasshopper. What does Ubie have in her other hand?” [Hint: a snail.]

The grasshopper is “lost,” and Ubie spends the remainder of the book searching for it. She finally finds it on the “moon,” which is a trick in the penultimate illustration.

“The whole story is true,” said Mr. Iacovello in a recent interview. He explained that the heroine’s name is Emmanuelle or Ubie (explanation in the book). “She’s the daughter of the [former] owner of Che’s Lounge in Vineyard Haven, and her mother ran the dress store upstairs.”

According to Mr. Iacovello, he watched Ubie play with insects in Che’s garden, and each day she would return them and tell them she’d see them the next day.

But one day, she couldn’t find Grasshopper, and she relentlessly asked all her friends if they’d seen him.

Eventually, Mr. Iacovello saw the grasshopper on a bathroom door; he watched it climb until it got to the silhouette of a moon, and then he told Ubie that “grasshopper is on the moon.”

After that, during winter, the story wrote itself as he sorted through his photographs of the girl. He thought to make it a coloring book to keep kids involved in the story as it develops.

He’s eager to find out how Vineyard kids react. Before printing it, he had the story posted on a website. The son of a friend kept asking his mother, “Grasshopper, mama!” and would go to the site and enjoy reading the book over and over.