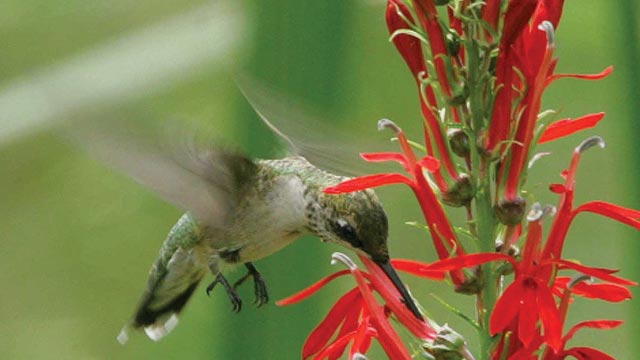 Bird populations are fickle. Over time, to be sure, long-term trends of growth or decline can become apparent, if enough good data are collected. But from one year to the next, the number of a particular bird species may vary wildly, unrelated to any trend, the reflection of the huge gambles birds take in nesting, migrating, and avoiding being eaten. Some years, for some species, everything just goes right.

This is part of what makes birding interesting: you never know which species is suddenly going to rise sharply in numbers, giving you unexpected opportunities to watch and learn about it. This year, one of the big winners among Vineyard birds is the tiny but popular ruby-throated hummingbird.

Hints of a big year for this species began to surface at the very end of April, when birders not just on the Vineyard but across southern New England began reporting unusually early arrivals of this migratory species, and unusually large numbers. It seems like every Islander I’ve spoken with about birds this season has said something like, “Oh, and we had the first hummingbird in our yard in years.”

The size and habits of this bird make it difficult to spot, so people’s perception of its abundance depend partly on their skill as birders. But I have no doubt that this season’s bumper crop is real. Some years, I can go for the entire nesting season and only see this species once or twice (they are much more plentiful as migrants in the fall, but that’s a different story altogether). This year, I’m seeing one or more nearly every time I’m out in the field, and they’re turning up in places (mainly down-Island) far away from the Vineyard stronghold of this species — up-Island stream drainages and wet woodland.

On a breeding bird survey route that I cover annually for the U.S. Fish and Wildlife Service, I spotted three hummers this year, versus my long-term average of less than one. I wouldn’t want to rely too heavily on these numbers, but they feel about right to me: I’d say our nesting population of ruby-throats might be three or four times the size of a typical year.

One can only speculate on the causes behind this boom, beyond the obvious point that over the last year or two, the breeding productivity of our population was higher than its rate of mortality. Weather and food availability last summer may have been especially good for this species, allowing more young to survive. Or perhaps weather patterns and conditions in the species’ Central American wintering grounds favored survival during the six or seven months when our hummers are traveling. Regrettably, there is no reason to expect the population boom to persist: a disastrous season can happen just as easily as a successful one.

In the meantime, though, Vineyard birders have unusual opportunities to enjoy a truly remarkable species. Perhaps the easiest opportunity for viewing this species comes when a hummingbird is nectaring at flowers, a fueling operation that keeps the bird in one area for a long time. Hummingbirds will drink from a wide variety of flowers (or from hummingbird feeders, which are essentially artificial flowers), but their preference leans toward red and purple blossoms, and toward long, tubular flower shapes. Draining such flowers is what the hummer’s bill, a needle-like appendage roughly a third of the length of the bird’s body, is designed for.

But during summer, hummingbirds often spend surprisingly little time at flowers. When they’re raising young, the premium is on obtaining protein to support growth, and that means hummers switch into fly-catching mode. Heaven knows how they do it, but that pointed, lengthy bill snaps shut with amazing precision on insects both flying and perched. When they’re away from flowers, hummingbirds can be amazingly difficult to spot; they are small, generally quiet, and very, very fast.

Once you have a little experience with the species, it gets somewhat easier to spot a tiny darting body, or even to track one with binoculars. And sometimes even hummingbirds need rest; if you’re truly lucky, you may find one perched and basking in the sun, an activity that may keep a hummingbird stationary and fairly approachable for a quarter-hour or more. The audible hum of the fast-beating wings, and the thin, squeaky vocalizations of this species, can also help an observer detect a hummingbird.

I’ve only seen one ruby-throat nest, a tiny cup of moss and lichen pasted to a horizontal branch about 30 feet off the ground. But although they’re hard to find, such nests are out there this season by the scores or hundreds, and tiny adults are packing gnats and flies into even tinier nestlings. The sheer smallness of these birds makes them irresistible; that such a thing can feed, fly, and avoid being eaten — let alone migrate across the Gulf of Mexico! — is one of the real wonders of the world of birds.

Thinking beyond the normal