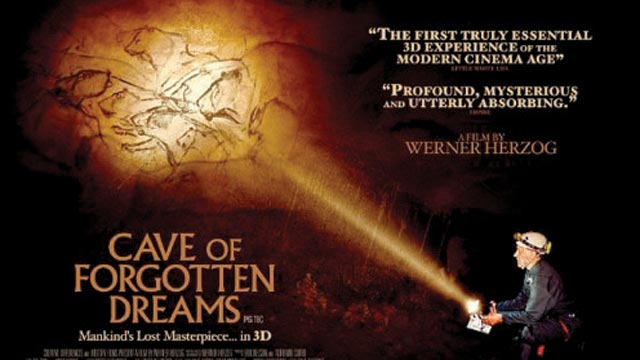 The Martha’s Vineyard Film Society (MVFS) will open its summer series on Tuesday, July 12, with Werner Herzog’s “Cave of Forgotten Dreams” at Union Chapel in Oak Bluffs. The Film Society’s location change comes after five years of summer films in the nearby Tabernacle.

“The move was inspired by the feeling that a film is best seen in an environment that is more closed in, more intimate,” explains Richard Paradise, founder and director of MVFS.

The opening film, the esteemed German director’s new documentary, “Cave of Forgotten Dreams,” focuses on the 32,000-year-old Chauvet-Pont-d’Arc cave in southern France. It contains the oldest known cave drawings in the world, dating from the Upper Paleolithic period.

Something about a cave inspires meditations on the human spirit, and Mr. Herzog waxes poetic both visually and verbally for his caving adventure. Chauvet is filled with stunning prehistoric drawings of bison, horses, bears, lions, and rhinoceroses, some depicted with attempts at motion.

The paintings suggest to Mr. Herzog the lack of barriers between human beings and the world of spirits. Speculating that the artists used their drawings to communicate and inscribe their memories, he proposes that these drawings by early humans raise questions about what constitutes human-ness.

Ironically, a nuclear power plant situated 20 miles away from Chauvet provides warm water from its cooling pools for adjacent greenhouses. Mutant albino crocodiles inhabit the waters of these “nuclearized” greenhouse waters, connecting a future where, as Mr. Herzog says, “Nothing is certain,” to the primeval world of the past.

The rest of MVFS’s upcoming films have a connection to the Vineyard. On July 19, former Island resident Sara Nesson’s new film, “Poster Girl,” will play, along with her short film, “Iraq, Paper, Scissors.”

“It all started here,” Mr. Paradise says. Ms. Nesson, who grew up summers on-Island, was a struggling Vermont filmmaker who earned her living making wedding videos, when she returned to the Vineyard to take part in the Combat Paper Project, held in West Tisbury. This 2008 workshop, designed to help Iraq War veterans heal emotionally, led to the making of “Iraq, Paper, Scissors.”

Ms. Nesson met veteran Robynn Murray at the Combat Paper Project, where veterans cut up their old uniforms and made paper out of them. Ms. Murray and her struggle with post traumatic stress syndrome became the subject of Ms. Nesson’s full-length film, “Poster Girl.”

“Quattro Volte,” MVFS’s July 26 film, although not literally Island-related, was suggested to Mr. Paradise by West Tisbury painter Rez Williams, who will introduce the award-winning Italian film. The August 2 documentary, “Cape Spin,” addresses the controversy over windmills planned for Nantucket Sound and other local venues.

Director Robbie Gemmel will introduce the film and a panel discussion on Cape Wind and other local wind projects will follow.

Island singer James Taylor appears in the August 8 documentary, “Troubadours.” Telling the story of the famous Los Angeles music club of the same name, this film is the only one in the series that will screen on a Monday. Mr. Taylor’s sister, the Islander and singer Kate Taylor, will appear as a special guest, along with filmmaker Morgan Neville.

In the final event of the Film Society’s summer series, Margaret Whitton’s film about a parrot and a librarian, “A Bird of the Air,” will premiere on August 16. The filmmaker, who spends her summers in Chilmark, also performs in New York at Shakespeare in the Park productions. Ms. Whitton and members of the cast will be present for the screening.

“I really appreciated working with the Tabernacle over the last five years,” Mr. Paradise said. The larger audiences the series draws in the summer necessitate its move to a larger venue than Vineyard Haven’s Katharine Cornell Theatre, which remains its winter home.

“Nora’s Will” at Summer Institute

The Summer Institute will bring a black comedy, “Nora’s Will” (“Cinco Dias Sin Nora”), to the Martha’s Vineyard Hebrew Center on Sunday, July 10. This tale by director Mariana Chenillo, set in Mexico, opens with elaborate preparations for a Passover dinner by an anonymous woman.

The table is set for 10 and the refrigerator filled with comestibles, all carefully labeled. But one delivery of food is diverted across the street to the apartment of a man the audience has seen the woman spying on. He delivers it to her apartment, to which he has a key, at first thinking she isn’t there and then discovering she’s dead.

Without being told directly, the audience begins to deduce that the dead woman is Nora, and the man who discovers her is her ex-husband, José. Suicide attempts have apparently been a regular factor in Nora’s life.

Alberto, a family friend, shows up, then Rabbi Jackowitz. The divorced couple’s son Ruben is notified, and that causes both complications and confusions. Jewish ritual requires burial of a body within two days of death, but Ruben is on vacation with his wife and daughters.

José peremptorily arranges for a Catholic funeral, complete with flowers in the shape of a cross, at the same time that Rabbi Jackowitz sends dry ice and a young man named Moises, who has instructions to pray over the body until Ruben arrives and a Jewish funeral can proceed.

As one complication or confusion after another follows, either you’re in on the joke or scratching your head. There are many truly comic scenes, like José donning one of Nora’s robes because the Rabbi has arranged for frigid air conditioning to preserve the body; or Ruben’s daughters playing in their late grandmother’s fancy Catholic coffin.

In the end, though, your enjoyment of the film depends on whether or not you are offended by such a flip treatment of suicide and death in a movie that shows very little sympathy for the deceased. This viewer would have liked to know more about Senora Nora and what led her to commit suicide. And less about her boorish ex-husband.

“Worlds Away” at Cinema Circus, Wednesday, July 13, 5 pm, Chilmark Community Center. $10; $5 members at the door or online until 8 am day of event.

“Charlotte,” Wednesday, July 13, 8 pm, Chilmark Community Center. $12 at the door or online until 8 am day of screening; $6 members. For more information, go to tmvff.org.