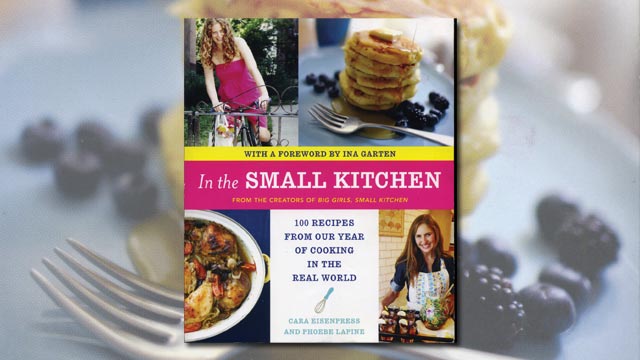 “In the Small Kitchen: 100 Recipes from our Year of Cooking in the Real World” by Cara Eisenpress and Phoebe Lapine, William Morrow An Imprint of HarperCollins Publishers, 304 pp. $21.99.

Phoebe Lapine and Cara Eisenpress have known each other since middle school and have maintained a close friendship into their early 20s, as each has pursued a professional career in their native New York City. Considering that Ms. Eisenpress formerly worked in publishing and Ms. Lapine in marketing, it’s not surprising that the two have pooled their talents in a literary venture. What may seem more surprising is that the quarter-lifers — as they refer to themselves — have accumulated enough cooking experience without the advantage of a culinary education or professional food-related jobs to turn out a cookbook.

But they have succeeded very well in creating a wonderful book that’s as fun and funny as it is a practical guide. “In the Small Kitchen: 100 Recipes From Our Year of Cooking in the Real World” is a combination starter cookbook and journal chronicling a coming of age year in the friends’ shared lives, as orchestrated by food.

The book is divided into chapters with titles such as “Dating and Food,” “The Dinner Party,” and “Leftovers,” and each section begins with an anecdote related by one of the two authors. They share their gastronomical successes — and failures — and introduce us to their enviably close-knit group of friends. There are stories about first time home-cooked meals with new boyfriends and a breakfast in bed ritual from college that the women revived for a day. They relate memories from childhood that inspired them to revisit the dishes of their youth and, throughout it all, they share their life lessons through the medium of food.

Ms. Lapine and Ms. Eisenpress early on recognized a shared love of food and after struggling with first jobs that Ms. Lapine describes as “corporate indentured servitude.” They realized that what really made them both happy was cooking and sharing their creations with friends. And so, like many aspiring writers these days, they launched a blog. “Big Girls Small Kitchen” features recipes for neophyte cooks and entertaining stories about the genesis of the dishes or the occasions that inspired them. Following on the success of the blog, Ms. Lapine and Ms. Eisenpress quit their day jobs to focus on their online venture. The site now has 70,000 followers and they have recently launched an offshoot called “Small Kitchen College.” The blog led to a book deal with William Morrow, an imprint of HarperCollins Publishers, and “In the Small Kitchen” was published earlier this year.

The idea behind both the blog and the book is using limited resources — space, budget, and experience — to feed yourself and your friends meals that transcend the usual fare of young adults on their own for the first time. Although the authors have included things like simple egg preparations and grilled cheese sandwiches, thorough instructions and tips turn even these kitchen-phobe staples into an upscale version of their slap dash counterparts. And there are lots of dishes that prove to be not nearly as intimidating as they sound — or look in the book’s gorgeous pictures. The woman have shared many of their favorite, relatively easy to prepare, impressive creations such as panko-crusted spinach dip, sexy ugly onion tart, Provençal baked chicken, and chocolate-flecked clafoutis.

And there’s everything in between Spartan and fancy, including cocktails, simple lunches, buffet style dishes, cookies and easy candies, vegetarian dishes and their meat counterparts for serving mixed crowds, and more. Unlike many cookbooks that are a conglomeration of favorite dishes or recipes around a theme, “In the Small Kitchen” is a thoughtfully composed collection of food for real life and every 20-something’s occasion. The authors have not only provided a practical guide for young people (or other first-time cooks) on how to feed themselves nutrititious home-cooked food, they have also related how food can serve a multitude of purposes — as an aphrodisiac, as an exercise in nostalgia, and even as therapy for homesickness and disappointment. But mostly, the two use food as a pretext for get-togethers — Sunday brunches, cocktail parties, even a Magazine club.

Throughout the book, there are multiple suggestions on how to avoid first time cooks’ mistakes like unintentionally overspending and choosing foods for parties that require too much stress-producing last-minute prep. They lay out the essential equipment and supplies at the beginning of the book and give tips on where to scrimp and where to splurge. Although the focus of much of the book is on entertaining and cooking for others, the authors’ primary mission is to avoid fussiness at all costs.

Says Ms. Lapine, an Island seasonal resident since childhood, “I think that part of the lesson in our book is that the atmosphere is not the most central part of having a wonderful evening. First it’s the company and second the food. We don’t put too much pressure on ourselves as hosts. We’ve included things like how to spruce up your coffee table, but it’s really more about serving delicious food and making people feel comfortable.” The recipes and the intimate stories make it obvious that the two longtime friends have succeeded very well on both counts.

Gwyn McAllister, a frequent contributor to The Times, lives in Oak Bluffs.