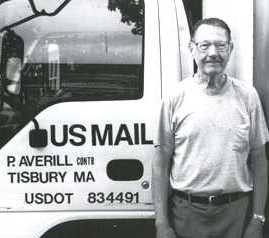 Preston Willoughby Averill Sr. (aka “Dad,” “Bumpa,” “Grampy,” “Grandpa,” “Uncle Preston”) died peacefully at his home in Vineyard Haven on Friday, August 12, with his wife, Gerry, at his side. The fifth of seven children, he was born to Alfred and Ada Willoughby Averill on December 31 in 1916 in Edgartown.

Beginning with his first job of making deliveries for his father’s bakery, he became known Island-wide for his strong work ethic. As a self-sufficient entrepreneur, he was adept at seeing a need and creating a business to fill it, working diligently until the business was on sound footing before moving on to another challenge. Some of his many businesses included a grain and feed business, turkey farming, home insulation, roofing, aluminum window and doors business, Island Transport (which included school busing, taxi service, rental cars, shuttle buses and sightseeing tours), Averill Distributors, and finally subcontracting for the U.S. Mail.

Playing chess was a passion that he readily shared with players of all ages — starting a chess club at the high school and playing regularly with friends and family. He was a 50-year member and past Master of Oriental Lodge and a member and past High Priest of Vineyard Royal Arch Chapter, receiving many awards and commendations from both organizations during his tenure. As a partial owner (and pilot), he played an active role in the development of the Katama airport.

You name it, he did it, forging lasting friendships with everyone he met. He had a knack for making visitors feel welcome and special from the moment they walked through the door with such comments as, “I wish I felt as good as you look,” and “I feel so much better now that you’re here.”

He is survived by his wife, Gerry, of 36 years, and children Preston Jr. of Oak Bluffs and Lorraine Leonard of Groton; step-children Becky Luce of Lebanon, N.H., Ehud Neor of Nitzan, Israel, and Mark Luce of Oak Bluffs; 17 grand and step-grandchildren and seven great-grandchildren (with another one expected in October); his sister, Carol Shaver of Chapel Hill, N.C., and brother Walter Averill of Jacksonville, Fla., and a beloved niece, Martha Look of Edgartown.

He was predeceased by his brother Alfred and sisters Marion, Dorotha, and Alita; daughters Corinne Hatt and Diane Averill and first wife Eileen Averill.

Calling hours will be Friday evening, August 19, from 4 to 6 pm at Chapman, Cole and Gleason Funeral Home, with a Masonic Service at 5:30 pm. A memorial service and reception will take place on Saturday morning, August 20, at 11 am at Grace Episcopal Church in Vineyard Haven. Friends are invited to leave a message for the family through the online guestbook at www.ccgfuneralhome.com.