The Vineyard Football Association closed out the second round group stages last week with Sports Haven taking the Group A title by two points over Atlantic FC and MV Celtic topping Group B with a plus-three goal difference over Monto Orthopedics. Both teams finished with nine points. However, Celtic scored 18 and gave up eight goals in four matches, while Monto scored 12 goals and conceded five.

Thus, the table was set for the playoffs or knockout stage, which began Tuesday at Veterans Park.

Coop deVille, previously winless and third in Group B, shocked the Group A second seed Atlantic FC 4-0 in the opener.

The second match was a nailbiter, with Monto prevailing over Shirley’s Hardware, 4-3 on penalty kicks, following a 1-1 draw.

The second round group semi-finals were played Wednesday night. Monto played MV Celtic in the first match, followed by Coop against Sports Haven in the nightcap.

The winners of those matches play Thursday for the second round championship.

The annual Sullivan 5K road race will be Saturday, August 27, beginning in Washington Park, Oak Bluffs at 8:45am.

In the girls 12 and under division, Molly deBettencourt of Oak bluffs defeated Kat Roberts, also of Oak Bluffs, 6-1, 3-6, 6-2. The match lasted two hours and was replete with long rallies and strategic play.

In the boys 12 and under division, Theo Guerin defeated Spencer Loitz of Chappaqua. N.Y. in an epic three set match, 6-7 (2), 6-4, 6-2, to claim the championship. VYT’s Justice Yennie almost pulled it out but lost to Ethan Bershtein of Woodbridge, Conn., 2-6, 6-4, 6-3. Overall, Vineyard Youth Tennis had almost half of the tournament draw represented in the Tourney.

Kat Roberts won the Courtside USA Points Ladder at Vineyard Youth Tennis accumulating 122 points. Molly deBettencourt was a close second at 108 points. The Points Ladder is an online ladder where youngsters challenge one another and play matches throughout the Island. Ladders are held throughout the season. The next one is scheduled for early Fall.

All the players mentioned above are club members of MV Table Tennis.

“The wheel’s kick and the wind’s song…”

The Holmes Hole Sailing Association continued its summer season of handicap racing from Vineyard Haven Harbor, Thursday evening, and competed in an 8.8 mile race through Nantucket Sound in the Chappaquiddick Rendezvous, Sunday.

Nineteen boats posted for the triangular race, Thursday, from red nun 6 outside the Vineyard Haven breakwater at 6:00 pm. The race took the sailors to red nun 4 at West Chop to green can 3a at East Chop and back to the starting line.

Sunday was warm and overcast and produced a 10 knot east-southeast wind. Eighteen boats reported to the starting line. The race committee set a course that took the fleet around East Chop, across Cow Bay, to nun 4 in the Edgartown Harbor Channel then to green can 3 off Cape Pogue with a finish at red nun 8 off the Chappaquiddick shore.

The first leg was a beam reach on the starboard tack then a close reach followed by another beam reach and a broad reach before a beat to the finish line.

In the A Division the first to finish was Andy Berry in Isobar. Then came Mike Loberg in Masquerade and (3) Jerry Goodale in Stormalong, (4) Roger Becker in Gloria, (5) Mo Flam in Penelope, (6) Brian Roberts in Aileen, (7) Paul Young-Hyman in Eclipse, (8) Stephen Besse in Apres, (9) Matthew Thomas in Grasshopper,and (10) David Mcdonough in Trinity.

First to finish in the B Division were Art and Caroline Spengler in Raven, (2) Dan Culkin in Magic Time (3) Michael Hoff in Nonsuch, (4) David Lott in Avanti, (5) Rebecca Colson in Silhouette, (6) Diane Hartmann in Triumph, (7) Woody Bowman in Julia Lee, (8) Jim Pringle in Myfanwy.

Notice for the annual Moffett Race has been issued. Entries are due by September 2. Please check the Holmes Hole web site for entry details and more information.

Deirdre Ling and Ed Russell were the high scorers sitting North-South at the Bridge Club of Martha’s Vineyard, Saturday, at the Tisbury Senior Center.

At East-West, top scores were those of Constance Batty and Beverly Williams.

At place and show were Clara Hargrave with Betty Dixon; and Claudia Bowser with Judy Morse.

Seven tables were in play.

At the Island Bridge Club, meeting at the high school on Thursday, Mollie Whalen and Al Shrive beat all at North-South followed by Foster Greene and Ken Judson. Marianne Keler and Robin Meszoly were third.

At East-West, winners were Cecily Greenaway and Joe Ashcroft, Foster Osborne and Charlie Harff were second, Caroline Baum and Art Spielvogel were third.

The IBC meets Thursdays at the regional high school beginning at 7 pm.

The winner of the football team’s weight lifting competition held Sunday at the high school’s weight room was Max Moreis, a 6’3″ senior, who benchpressed 350 pounds.

The Club’s annual Pistol Championship will be Saturday, October 8 from 10 am to 3 pm at the R&G Club’s target range. Members and non-members are welcome to compete. Refreshments will be available throughout the day. 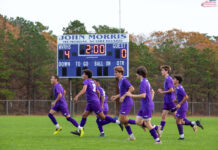