Basil Welch was born on April 16, 1924 and died in the afternoon on September 24, 2011. He was a fixture around town and lived a life that experienced more changes in our world than many of us ever will. We all know he was quite a character and if I close my eyes and think of his voice I can hear him calling me “dear” as he always did when I had the opportunity to chat with him. His anecdotes, tall tales, wordy prose and sweet demeanor will be sadly missed.

Coast Guard Senior Chief Jason Olsen of stopped in at the Texaco the other day with his head hung a little lower than usual. Typically full of smiles offering up stories of his kids especially how big baby Gabriel is getting, he had some sad news to share. That yellow dog with the bobbed tail that we have all seen on his walkabouts has gone to dog heaven. Bridger, Station Menemsha’s mascot of over a decade, will be missed by all at the Station and by many of us who have, on occasion, picked up the phone to report his whereabouts.

The hull truth is Charlie Finnerty is nearly ecstatic with his new Henriques 28 named LucyAnna. The pale yellow boat is fondly named for his mother and daughter. Annie stopped by to check out the new ride and she seemed nearly as pleased as Charlie. Charlie is getting a feel for his new boat and chartering is something you should certainly call him about.

There is a second new boat in Menemsha. Tim Walsh, brought the 50-foot Constantino L up from Cape May, New Jersey, this past week. From what I understand, it was formerly used as a bunker boat but Tim has different plans. He has a stand and a pulpit ready to go on after a little ripping and tearing takes place.

Garth and Ollie Edwards, of Abel’s Hill and Essex, Conn., will celebrate their 72nd anniversary on September 30. They and their extended family have enjoyed more than four decades at their Chilmark home. Their grandchildren grew up spending summers here and now great grandchildren are enjoying their family home that is bustling several times during the year with the four generations of family present at one time.

Bob and Emma Shalhope were all smiles this past week tooling around with Bob’s brother and sister-in-law, Don and Betty. The couple, visiting from Hood River, Oregon, took in the Island from end to end — Edgartown, East Chop, Menemsha and more.

I will preface the following information with a personalized special request: Bob, don’t kill Carol for sharing her excitement that involves you. Bob and Carol Merry celebrated their three grandchildren’s third birthdays last week in Duxbury. Lucy Koenig, Georgia and Cullen Merry were all born on the same day at the same hospital with the same doctor. Now that is family togetherness. Bob and Carol also ventured as far as Brunswick, Maine to visit a close friend and made a little pit stop at the LL Bean outlet in Freeport to get a little early Christmas shopping under their belts. They rounded out the day with a nice dinner in nearby Harpswell, on Casco Bay.

Carol is very proud to share her husband’s skeet shooting accomplishments. Bob took home six trophies at the State Skeet Shooting Tournament in Ludlow. With his good friend, Spider Andresen, he will venture to the 76th annual NSSA World Championship at the National Shooting Complex in San Antonio, Texas, from September 30 to October 7.

The Boston String Quartet will present “WorldSong” at the Chilmark Church on October 2 at 4 pm. Join the critically acclaimed quartet for a fresh and original blend of music from throughout the world. This is the concert that received some great publicity back in August, but at the last minute it was cancelled because Irene came to town. According to Pam Goff, music lovers of all ages should truly enjoy this event.

Since he is an avid fisherman, we see a lot of Brian Curry. His wife, Toni, however, isn’t out in the spotlight so much. Did you know she ran the 2008 Chilmark Road race along with 30 friends as the Red Bandanna Runners? Welles Crowther, the man in the red bandanna, was a classmate of Toni and Brian’s son. In his honor, a series of Red Bandanna Run/Walks have been organized to raise money for the Welles Remy Crowther Charitable Trust that helps fund youth organizations. This year the race is taking place October 15 at Boston College. Many Vineyard residents will not be able to attend, but if you would like to show your support please do so at redbandannarun.com. 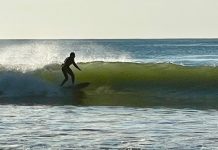 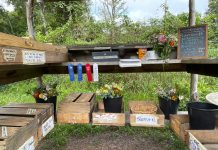 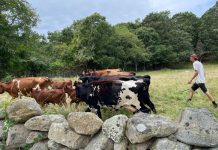