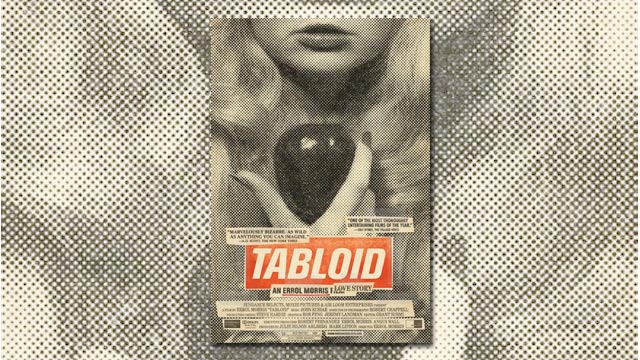 The documentary plays Saturday, Oct. 8, at Vineyard Haven’s Katharine Cornell Theatre under the auspices of the Martha’s Vineyard Film Society.

“Tabloid” is another entry in Mr. Morris’s series of films about weirdos. A major presence in the documentary world, this director invented the Interrotron, a device that records interviews simultaneously with two cameras so subject and interviewer can stare each other down.

Best known for “The Thin Blue Line,” a documentary about a killer on death row in Texas, Mr. Morris puts the Interrotron to good use with Ms. McKinney. The former Miss Wyoming became a sensation in the British tabloids over her obsession with her Mormon fiancé, Kirk Anderson, in the 1970s, after she allegedly abducted Mr. Anderson and turned him into her sex slave.

“Tabloid” opens with the credits rolling over scrapbook photos of Ms. McKinney from her childhood. Modishly framed to look like a nostalgic home movie, shots follow of Ms. McKinney from the 1970s with long, blonde hair, as this former model and part-time prostitute reads a fairy-tale version of her life.

Like so many documentaries that focus on unusual or controversial people, “Tabloid” relies heavily on headshot interviews. In addition to the appealing and persuasive Ms. McKinney, the viewer hears from Daily Mirror photographer Kent Gavin; Jackson Shaw, the pilot who flew Ms. McKinney to London; the friend K.J. May, who accompanied her to England; Daily Express reporter Peter Tory; and a South Korean scientist who pioneered dog cloning. More about that last interviewee later.

The back story on Ms. McKinney’s British misadventures concerns the love of her life, Mr. Anderson. According to Ms. McKinney, just before the couple was to be married, Mr. Anderson disappeared.

She traced him to London, where he was performing Mormon ministry outreach. With help from her friend K.J. and a hired bodyguard, she apparently chloroformed Mr. Anderson, taking him to a Devon cottage. Mr. Anderson refused to comment or be interviewed.

“It was real Franco Zeffirelli,” she tells Mr. Morris and the camera. “I was like his little lassie.” After the British tabloids turned her into a celebrity, Ms. McKinney was arrested and spent three months in jail.

Once she made bail, Ms. McKinney escaped to Canada with K.J. by wearing a fat suit and a wig. The two claimed they were deaf-mutes. Thirteen suitcases full of news clippings and photographs went with them.

Ms. McKinney’s bizarre story does not end there. Because her sheep dog Millie always accompanied her on her assignations, the tabloids were able to track down the paper — and photo — trail of her shady exploits. After Millie came Booger, a pit bull with an uncanny ability to fetch whatever his mistress needed.

When Booger died in 2006, Ms. McKinney had him cloned in South Korea at a cost of $150,000. Describing herself now as an old woman loved by dogs and children, this oddball continues to work on her memoirs. One of the tabloid journalists who wrote about her calls her “barking mad.”

Anyone who reads The National Enquirer or its ilk will savor every lascivious detail in this documentary. Mr. Morris incorporates all the latest bells and whistles employed by trendy documentaries, including cartoon reenactments and vintage stock footage.

Compared to his more serious, politically based work, “Tabloid” comes up short. It’s fun to watch, but do Ms. McKinney’s shenanigans really add up to more than a hill of beans? Maybe the audience should ask Mormon presidential candidate and former Massachusetts governor Mitt Romney.

Brooks Robards, of Oak Bluffs and Northampton, is a frequent contributor to The Times.