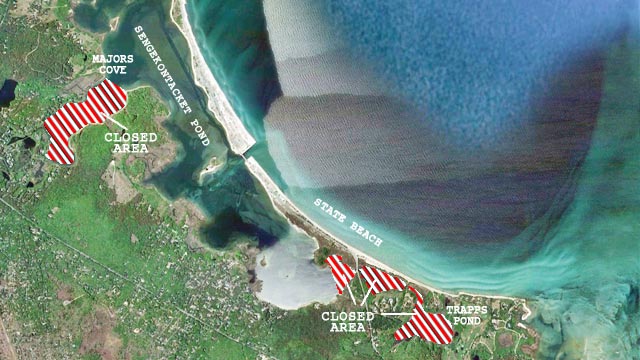 “They didn’t come out great,” Mr. Grunden said. “We had to extend the closed areas to include all of Major’s Cove. “The rest of the pond we could open up.”

A new area on the Edgartown side of Sengekontacket Pond was also ordered closed by state officials, Edgartown shellfish constable Paul Bagnall told The Times.

“They expanded the closed areas from Trapps Pond to just beyond the culvert for Crab Creek,” Mr. Bagnall said. “When you look at the spot on a map it’s not much, but it is a popular spot to dig littlenecks.”

The state classifies the popular salt pond as a “conditionally approved area,” because of higher than allowable bacteria counts in the summer months. For the past five summers, the state Division of Marine Fisheries (DMF) ordered Sengekontacket closed to shellfishing in June, July, August, and September, and allowed shellfishing to resume on October 1.

This year, however, water samples taken in the last week of September showed higher than allowable bacteria counts, and DMF extended the shellfishing ban into October.

Mr. Grunden said he posted the information on the town’s web site and notified Oak Bluffs selectmen by email late Friday night. He said clamming activity was limited over the weekend.

“There hasn’t been a huge crowd out there,” Mr. Grunden said. “Most of them were actually scalloping.”

The shellfishing ban does not affect bay scallop harvesting, because the edible part of the scallop does not accumulate bacteria.