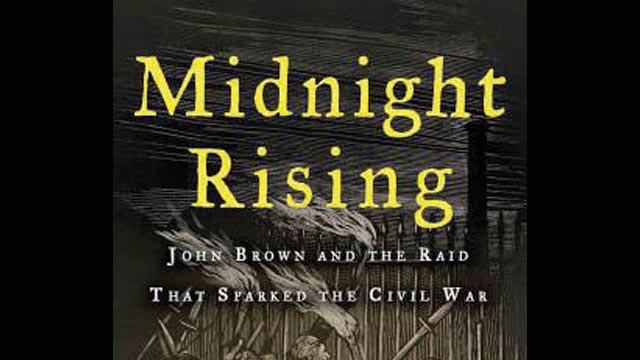 We are on a great literary run right now. History as popular literature is a rich vein for writers and publishers and there have been some barnburners recently. This is one of them.

Island-based bestselling author Tony Horwitz got it done with “Midnight Rising,” the story of John Brown, whose abolitionist escapades culminating with an 1859 attack on a federal arsenal in Harpers Ferry, Va. is recognized as a proximate cause for our Civil War two years later.

Writers like Messrs. Horwitz, Philbrick, Junger, and Nick Bunker recreate living figures that I understand and can root for. I’ve always thought John Brown was merely a complete loon albeit with his heart in the right place. That maybe the raid grew out of a few too many beers one night at the local taproom. But John Brown spent years planning it, his life’s work.

Mr. Horwitz picked his way through a literal minutiae of personal correspondence, newspapers, and government inquiry reports to frame the personality of this dirt-poor Ohioan who failed at everything he set out to do — and says so in his correspondence — except for one thing: kicking slavery’s butt. “Midnight Rising” documents Brown-led raids in the “Bloody Kansas” free state versus slave state violence during which he and his cadre dragged slaveholders from their houses and summarily killed them.

We learn that well before the Civil War, we were already two nations. Brown skulked south of the Mason-Dixon line in disguises and aliases. Sixty days later, he was speaking in public places in Boston.

We learn also that Brown’s jihad grew more fevered during the years of his mission and that his family (he fathered 20 children with two wives) in upstate New York were chief among the casualties of his jihad as violence, penury, and privation killed and shriveled a wife and nine of his brood.

“Midnight Rising” is a reporter’s story. Mr. Horwitz quotes professional colleagues, his family, and his fighter band as they watch him descend into delusional ideations of a messianic role in which God was calling the shots through him.

John Brown was a religious fundamentalist and a conscientious man, aware of the effect of his choices on his family, his creditors, and his benefactors. He shows up, in the final analysis, as a man seeking the fate he got. We know the man well before he and 18 guerillas pad silently down that Maryland country road at midnight on Oct. 16, 1859 to Harper’s Ferry across the river.

For decades I’ve happily avoided tendentious, arid tomes on this war or that historic figure in favor of the historical novel. Sort of the Cocoa Puff strategy: I’m getting some nutrition and it tastes good.

You want life in the Middle Ages? Follett and Cornwall have you covered. “Rise and Fall of the Roman Empire”? No thanks. I’ll thank Robert Harris instead.

But over the past two or three years I’ve read four or five engrossing stories like this one that are fact-based, research-heavy, by God journalism. In this book, for example, I found myself able to know the finished product that was John Brown enough to see that he shared similar life experiences with other fanatical leaders — marginalized, failure-ridden, violence-seeking megalomaniacs — from one who took the world to war 70 years ago to the jihadists of 9/11.

Mr. Horwitz spent three years recreating the real John Brown. I know who he is better than I know who Scott Brown is, or frankly, who any of our leaders are. Seems odd.

In an Op-ed piece in The New York Times last year, Mr. Horwitz addressed that point within the context of the Civil War: “The Civil War isn’t just an adjunct to current events. It’s… a storehouse we can tap into in lean times like these, when many Americans fell diminished, divided and starved for discourse more nourishing than cable rants and Twitter feeds.”

Mr. Horwitz will speak at the Speakeasy Series, Nov. 29, 5:30 pm, at State Road Restaurant in West Tisbury as part of a 3-part fundraiser for the West Tisbury Library. For more information, call 508-693-3489.