West Tisbury selectmen last week expressed continuing frustration with the Dukes County Code Red emergency notification system. Selectmen at their Wednesday, October 26 meeting said the reverse-911 system should only be used for emergencies and not for public announcements.

At the request of selectmen, town emergency manager John Christensen presented a report on efforts to address concerns over use of the Code Red system. He said that Dukes County Sheriff Michael McCormack has asked the Island’s emergency management directors “to define what an emergency message is for him so he doesn’t get on the hot seat again.”

The seat got hot after Oak Bluffs used the system to make an Island-wide announcement about parking restrictions for the town’s August fireworks display prompting widespread criticism from Island officials.

Mr. Christensen said he would work with Peter Martell, Oak Bluffs emergency management director, to develop some guidelines about what is and is not an emergency, that would then be presented to selectmen.

Once there is Island-wide agreement, the association of emergency managers will then present recommendations for the use of Code Red to the sheriff, he said.

Selectmen agreed that when other means of communicating information are available, including websites and newspapers, these should be used rather than the Code Red technology.

The selectmen told Mr. Christensen that Oak Bluff’s use of the reverse-911 technology to announce parking restrictions, road closures, and detours prior to the August Oak Bluffs fireworks was inappropriate.

“That would be a good example of what is not an emergency,” selectman Cynthia Mitchell said.

“The sheriff told me that the system could be used for public service information,” selectman Richard Knabel said. “But the responses I got from people who talked to me about it was that they do not want it used for public service information. They want it for emergencies that require some action from the people who get it, but it is not a PA system.”

Chairman Jeffrey “Skipper” Manter said, “I thought that when you heard the message ‘Code Red’ you were supposed to stop what you were doing and listen carefully to this message because there could be dramatic consequences for you.”

The selectmen were also surprised by a Martha’s Vineyard Commission (MVC) request that provided no time for consideration for a letter of support of an application for a federal grant to prepare a county-wide Vineyard “pre-disaster engagement plan.”

MVC planner Joann Taylor told selectmen that the MVC, with assistance from the town emergency managers, prepared a similar plan five years ago that identified potential natural disasters that could be avoided or limited in severity by construction solutions. There is now as much as $105,000 in funding available to update the plan, she said.

“This time around we want to try to make the plan more useful so that Island towns can be more successful in getting implementation grant applications approved for federally funded improvement projects,” Ms. Taylor said.

Once completed, towns could apply for funding grants for projects identified in the Plan up to $300,000 in cost, 75-percent of which would come from the federal government. “Having this plan approved gets your foot in the door,” Ms. Taylor said.

The selectmen questioned Ms. Taylor about the overall budget for the plan development. Ms. Taylor said she would provide the information. The selectmen said they would defer their approval of the MVC request until they had seen the project’s total budget.

Ms. Taylor said that the letter of support was needed before the selectmen held their next regularly scheduled meeting.

In other business, the selectmen unanimously approved the energy committee’s request to move forward with an application to the state for a “Green Community” designation in 2012. With the designation, West Tisbury would be eligible to apply for a state grant of $130,000-$170,000 to offset the cost of installing solar panels at the municipal landfill, to reduce the town’s energy costs.

Committee chairman Sandy Shapiro and member Sue Hruby provided an answer to a question selectmen asked two weeks ago regarding the future implications of the Green Community designation.

In order to achieve the “green energy community” designation, West Tisbury would need to undertake a number of steps including adoption of the state “Stretch Code”(extra-efficient energy) requirements for all new residences larger than 3,000 square feet plus all new commercial buildings.

Town building inspector Ernie Mendenhall said that he believes the West Tisbury building codes to be very stringent as now written. He repeated his concern expressed at an earlier meeting that there are too few certified “home energy raters” on the Island who do not work for construction companies. The home energy raters make inspections and conduct tests to ensure compliance with the code.

Adoption of the Stretch Code would require passage of a bylaw at the annual town meeting in April 2012. 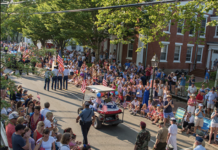