Tisbury selectmen Tristan Israel and Jeff Kristal set a public hearing for 5:30 pm on December 13 to consider an amendment to the town’s shell-fishing regulations, in response to a request from shellfish constable Danielle Ewart. Mr. Israel ran the meeting Tuesday, because Geoghan Coogan, the chairman, was absent.

Ms. Ewart explained that under Tisbury’s current shellfish regulations, two commercial fishermen are allowed to make one boat trip a day to shellfish. A few, however, have found a way to get around that restriction by transferring shellfish from their boats to another boat owned by a person not currently shellfishing, she said. Ms. Ewart suggested that the town add a regulation to prohibit the transfer of shellfish harvested under one shellfish license to another.

In other business, the selectmen approved one-year beer and wine license renewals for the Black Dog Tavern Company, Le Grenier, Rocco’s Pizzeria, and Zephrus restaurant. They agreed, at the request of co-owner Hocine Khelalfa, to prorate the license renewal fee for Little House Café, which paid for a full year but has only served alcoholic beverages since July.

At fire Chief John Schilling’s suggestion, in follow-up to discussion about beer and wine license regulations last year, the selectmen voted to require that the fire department, board of health, and building inspector inspect all Tisbury restaurants annually, not just those licensed to serve beer and wine.

The selectmen also voted, as a show of confidence, to approve new policies and procedures for the Tisbury Police Department, presented by police Chief Dan Hanavan on November 1. And, in other business, they appointed Camron Adibi to the wastewater planning committee. 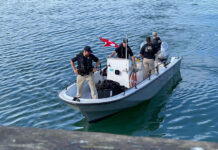 One swimmer dead, another missing near Big Bridge

One swimmer dead, another missing near Big Bridge