Sunset is now visibly later, though mornings are still dim. The weather has made possible all sorts of unseasonable and unreasonable outdoor activities, some of them — such as patio entertaining — conducted under the light of the moon. Hawks and owls are active. Mild conditions have cut winter moth populations some slack; likewise those slackers among the human population.

Accompanied by neighbors, my husband and I resumed our famed New Year’s Day Walk, which we’d put on hold since 2009 while his faux knees (“phonies”?) settled in. We like to hike from Menemsha back to Christiantown, along the beach.

We did not pack bathing attire, though it should have been no surprise that overheating would be the main challenge. It was a bluebird day — sunny and mild, no wind, and low tide. Nonetheless, the effects of coastal erosion, of both beach and gullied bluffs, were everywhere apparent.

That reminds me to mention that good soil conservation practices avoid the clearing of slope when cutting brush and clearing land. The practice of “cleaning the woods” is often undertaken in an effort to demonstrate responsible land ownership: sad to say, it is not. Slowing run-off is, however, a worthy goal in practicing good land stewardship. Trees, plant-cover, underbrush, and leaf litter effectively protect soil surfaces, allowing more moisture to return to the ground, rather than sheeting off it, accompanied by topsoil.

Weather service predictions all agree on the increasing likelihood of sudden, intense rains of brief duration, a trend we have already seen. Cloudbursts are capable of collecting destructive volumes of rainwater in record time and sending them hurtling to sea level, as in Vineyard Haven and around the Lagoon. Cleared slope aggravates this tendency by removing vegetation that impedes flow and holds soil in place.

Islanders have been able to collect nice harvests from vegetable gardens — for us, beets, leeks, Swiss chard, parsley, dill, cilantro, mustard greens, kale, radicchio, lettuce, and arugula. But, recently, I have found it necessary to seek out shopping-list items from the produce section, where I had come to feel like a stranger! When I reflect that the garden is “supposed” to be frozen solid and maybe under snow, I am uncertain which scenario it is that I wish for.

Using a spading fork to leave roots intact, I dug most of my ‘Bleu de Solaise’ leeks. They are lovely in the garden due to the contrasting blue/violet color of the tops and attractive form, and I held off digging them just because they are beautiful. I lined a nursery-sized pot with a layer of dampened shavings, then packed the leeks in, their tops trimmed to an inch or two of green, and covered with more damp shavings. I put beets in there too. The tub is in the cellar, where I hope the contents keep well.

Using the same type container filled with compost, try sowing cold hardy vegetable seed such as lettuce, dill, carrots and beets in the top layer of soil. These do not need a warm place to germinate and grow, just adequate shelter and light.

Although the original recipe (in “Lulu’s Provençal Table,” by Richard Olney (Harper Collins, New York, 1994, 365 ppg.)) for this nice winter dish specifies Swiss chard for the gratin, any available winter garden greens suitable for gratin, such as spinach, collards, kale, or a mixture of mizuna/mustard/sorrel/Swiss chard may be substituted. For the fish, a two- to three-inch-thick section of white-fleshed fish, such as cod, haddock, or halibut:

handful of small croutons, cut from crustless slices of bread, fried in olive oil until golden and crisp

Separate the green leafy parts of the chard from the thick ribs. Wash and drain them separately. Trim the ribs and cut into large dice. Cook the ribs in a large pot of salted, boiling water for 10 minutes, then add greens and stir with a wooden spoon until water returns to a boil. As soon as greens are completely limp — a few seconds after the boil is reached — empty pot into a colander and refresh chard beneath cold running water. Squeeze the mass of chard repeatedly in both hands to form a firm ball. Chop it, slicing thin, give ball a quarter turn, and slice thin again.

In a heavy sauté pan over medium-low heat, warm 2 T. olive oil and most of the butter. Add the crushed garlic and, when the air is filled with its scent but before it begins to color, add chard, salt, and pepper. Stir regularly with a wooden spoon for 10 minutes, or until chard has lost all superficial moisture. Sprinkle over flour, stir well, and begin to add milk, a little at a time, over a period of some 10 minutes, stirring and waiting until chard absorbs each addition before adding more milk.

Preheat oven to 375˚F. Using food processor, process mixture rapidly to form a coarse purée. Pour it into a buttered gratin dish, grate over dry bread, drizzle over olive oil and bake for 10 minutes, remove from oven and place fish on top of chard. Sprinkle with breadcrumbs, drizzle with olive oil, and return to oven, counting about 20 minutes, or until fish turns white and crumbs golden. Place a slice of butter on top to melt when fish is removed from the oven. Scatter croutons over the surface. Serves 4.

Homegrown meets Sunday, January 15, at Agricultural Hall from 3 to 5 pm. 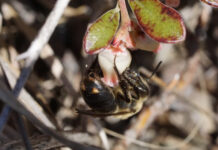