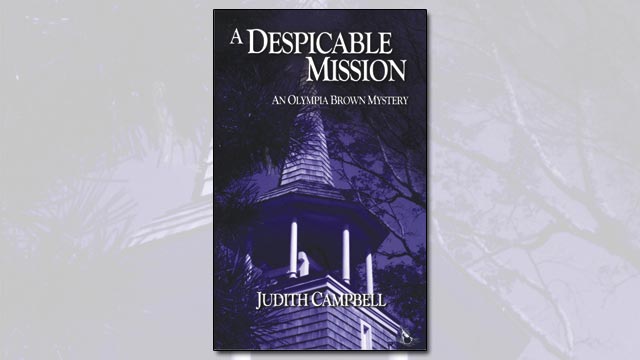 Writers have long been told by literary savants to write what they know.

The Rev. Dr. Judy Campbell, an ordained Unitarian Universalist (UU) minister, has used her ministerial background to create a mystery series around protagonist Rev. Olympia Brown, a UU minister who keeps running into the dark side in her pastoral duties.

Dr. Campbell’s third Olympia Brown mystery, “A Despicable Mission,” is set on Martha’s Vineyard, where Dr. Campbell was pastor of the Unitarian Universalist Society of M.V. for seven years until 2008, before launching her mystery series career. She clearly paid attention to our offbeat mores and culture and “Despicable” is replete with references to Island people and our ways that made this reader chuckle and nod in recognition.

The series is typically set in Boston and Cambridge and the next two books in the series, due in October 2012 and March 2013 respectively, will return to the Hub as Olympia tries out other forms of ministry.

“A Despicable Mission” is a story of a pastor who lands a summer gig at the Vineyard UU church and runs into a quartet of rascals who’ve been working upscale East Coast communities, scamming well-heeled elderly residents out of their property, sometimes by deadly means.

The Rev’s adventures are engaging and, perhaps as important, challenge the stereotype about mystery heroes, much as the Island’s queen mystery writer Cynthia Riggs’s nonagenarian heroine, Victoria Trumbull, who can sleuth on par with private eyes half her age.

“The writing,” Ms. Campbell has said, “has become a part of my ministry.” A former professor at Lesley University in Cambridge for 27 years, author of children’s stories, poetry, and art books, Ms. Campbell has dubbed herself “The Sinister Minister.”

Mystery-writing now has sub-genres, as colleague Don Hinkle pointed out last summer in his review of Ms. Campbell’s “An Unspeakable Mission,” a previous novel in the series. Ms. Campbell’s work qualifies for its place on the mystery bookshelf. For openers, there’s precious little mystery about who the bad guys are. There is more tea than gore in the text, and hard-boiled describes potluck menu choices rather than the time-honored idea of emotionally unavailable sleuths.

No, the trick here is crime-solving with civility, eschewing amorality, and advancing the ethical notion that we do well by doing good. In a more traditional mystery novel vein, good triumphs over evil and Ms. Campbell provides a good old-fashioned temporal butt-kicking to those whose ethical strike zone is larger than society allows.

Ms. Campbell gets props here for thinking out of the ministerial box. Olympia, the protagonist, has a full and complete life, with a lover and an estranged daughter. She takes time out from crime-solving to minister to Island residents battling sickness and alcoholism. Olympia’s persona reminds us that the stereotypical clergy person – if the stereotype ever really existed – does not fit our world today.

This read delighted me as I came to understand that mystery-writing is an extension of Ms. Campbell’s ministry and got examples that piety’s best use is in relationship with others. For example, as I learned to suspect arch-villain realtor William Bateson, I immediately hoped he would get “two in his hat” as they say in crime mystery patois. The Rev. Brown, however, is able to withhold her contempt prior to investigation, a worthwhile life lesson.

And as she learns more about a seemingly lecherous trust-funder, we learn that his faux lechery is a mask for life issues – his own serious illness and a wife he loves who is killing herself with alcohol a day at a time.

Now, here’s the thing. I have a well-formed fear of religion generally and I don’t want to be preached to. It would appear that Ms. Campbell’s work (she runs spiritual retreats and writing group as well as ministering) has given her a compassionate view of the human condition.

Her heroine teaches by example, as well as catching the bad guys. Pretty cool stuff.