Who is that band wearing tuxedos and sunglasses playing surfer rock?

Meet guitar player and vocalist Slim Bob Berosh, drummer Rob Myers, and bass player Jerome Badot. The band is Master Exploder — that perfect garage band — humble, simple, and in it for the love and the music. Two years ago it started as an idea, now the band is rocking local bars and venues on Martha’s Vineyard.

In an interview at WVVY studios in West Tisbury, the three friends spoke to The Times about their history, music, and future. The band had just finished a two-hour practice session at Martha’s Vineyard’s independent station, where they played some new songs for a private audience.

The energy level at a Master Exploder show is intense, electric, and makes even the worst dancers look good moving to the classic, punk, rock and roll sound.

What is the story of how you guys formed Master Exploder?

Slim Bob — “There are so many great musicians here, it was hard to find the right bass player who could fit.”

Jerome — “I was known as ‘The Punk Bass Player’ at the time.”

Rob — “We gelled right from beginning; we are just friends who get together and play music. I think that is why people like the sound.”

How did you guys come up with the name?

Rob — “We got the name from the Tenacious D song, ‘Master Exploder.'” Once we said it [Master Exploder] we all knew that was it.”

Describe the sound you create, the style, what kind of music is it?

Rob — “We are intentionally trying to make people dance.”

Slim Bob — “It is punk rock, but I also like the Stones, and I like metal…and Sabbath… It’s not punk, it’s not metal — it’s all rock and roll.”

Master Exploder recently played at an Irish pub called The Black Watch Pub in New Bedford. At first the band was unsure of how the audience would respond to their sound. Though a Bruins game was on, people slowly trickled onto the dance floor and as the night went on, they had the crowd moving.

At a local house party on the Vineyard, these three guys rocked for hours as people danced. Elisha Weisner from Kahoots joined them on guitar. Not many recognized these guitar-playing, drum-beating musicians wearing tuxedos, shades, and leopard headbands. The place was alive and dancing all night to the sound of Master Exploder, and they did not even know it.

Where else have you guys been playing?

Rob — “The Dive Bar, that has always been our spot. Recently somebody asked us to do a whole night of surf music. So we decided if we were to do this gig, we would not play as Master Exploder.”

Slim Bob — “We created a side project: The Hammerheads.”

You sounded great live, what can you tell people about Master Exploder who have not seen a live performance?

Jerome — “If you were to listen to the record, and come listen to us live, it’s the same thing.”

The quality of Master Exploder’s live recorded album sounds like they paid big bucks to publish their music on a CD to sell. Actually, the recording of the self-titled album was recorded in a weekend using only tapes and microphones.

What did it take to make such a unique first album?

Jerome — “We recorded all the songs in one day, then we mixed it the next.”

Rob — “Elisha from The Kahoots was our engineer, and we had really good microphones, oh yeah, and a really good tape machine.”

Slim Bob — “We are just working class guys… Economically we wanted to make this cheap as possible.”

What does the future look like for Master Exploder?

Slim Bob — “We have enough to record another album; we will be recording that in the Fall 2012… Expect a new album out for the winter of 2012.”

Where can people go to see you guys live or listen to your album?

Jerome — “The Pit Stop. It is what we need on the Island, you know, a good venue for indie rock. It’s not a bar, so that means all ages shows for young and old people to come out and rock.”

At the grand opening of The Pit Stop in Oak Bluffs, on February 24, the scene was explosive. Master Exploder showed just how live their music could get. The young and old crowd responded with jumping around, head banging, air drums, and air guitar. The feeling was positive.

Master Exploder’s album can be heard on air live online at bccradio.org, and at 89.3 WUMD, UMass Dartmouth’s radio station on the show “Not Just Twinkies & Ho-Ho’s” with host Shauggy on Tuesdays from 12 noon to 2 pm. The artwork for the album was done by Jerome’s father, Marco Badot. The explosion of colors Marco used depicts the sound of the album: turn it up, get loud, and blast off.

You can see the explosion on the album cover, tee-shirts, or at one of their shows on Rob’s bass drum head. “What the lips were to the stones, this is what people are going to think of: Master Exploder,” said Slim Bob.

Stay tuned to WVVY online radio or 93.7 FM for more on this band, and keep an eye out for this new punk, rock and roll, metal band on the rise.

The album is available at aboveground Records in Edgartown. See Master Exploder live at The Dive Bar this summer.

Sean Wilcoxson is a freelance writer who lives in Edgartown. 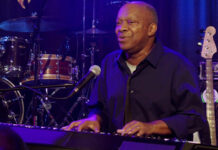 Kemp Harris comes to the Island