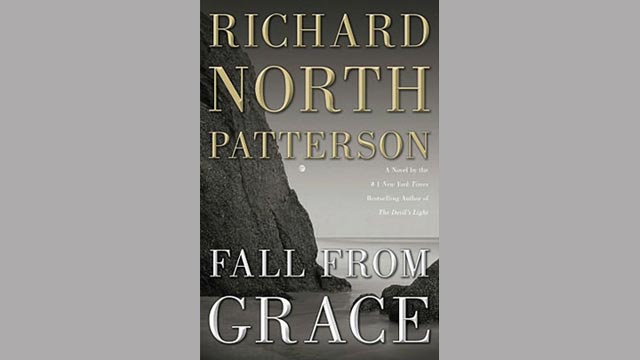 Carla Pacelli, a 30-something former Hollywood celebrity and recent graduate of the Betty Ford Clinic, is sitting in Atria restaurant in Edgartown during high season. “Having drive and talent is different from having character,” she’s telling Adam Blaine, the protagonist of “Fall from Grace,” Richard North Patterson’s latest thriller.

That’s good advice for the Island kid-turned-CIA agent who’s back after 10 years of self-exile to figure out who pitched his dad off a Chilmark cliff after a glorious Menemsha sunset.

There are plenty of candidates, including Ms. Pacelli and Adam’s mom, his gay brother, and his uncle. Adam could have been a candidate but he was in Afghanistan on CIA business when Ben Blaine took his final flier.

Talk about character. A hundred pages into this one, you’d have volunteered to do the job on Ben Blaine yourself. Turns out the best-selling novelist, globetrotting correspondent, and world-class womanizer was long on drive and talent but consistently short on character.

“Fall From Grace” is Mr. Patterson’s latest effort and the best I have read from him. And we get a bonus. It’s set on the Vineyard, start to finish. A longtime seasonal resident, Mr. Patterson includes some wickedly spot-on looks at life as it’s lived here, both in glitzy season and during the often dark and seamy off-season.

We learn that Ben Blaine was a poor Island kid whose father was a sometime fisherman and full-time violent drunk. Ben spent his childhood looking over the fence at the wealth and privilege around him in Chilmark. He shaped a ruthless determination to dominate everything in his world, beginning with a beatdown of his father when he was a teenager. He parlayed that experience into a career as a worldwide media name.

Turns out Mr. Blaine was dying of brain cancer at the time of splashdown and had recently changed his will into a disaster for his nearest and dearest. The final will virtually disinherits his family, thanks to a post-nuptial agreement signed by his aristocratic, nouveau-poor wife decades ago. He leaves the Chilmark family manse and the bulk of the money to his latest lover, Ms. Pacelli, who washed up on our shores sans career and in financial tatters herself.

Mr. Blaine inexplicably leaves a million bucks to Adam’s former girlfriend. Estranged son Adam gets 100 grand and Ben’s wife of 40 years, his brother, and Teddy, his eldest son, get bupkis. Adam, home on bereavement leave, gets to sort it all out. The plot line might sound over the top if we were in Ohio, say, but on the Vineyard, not so much. Things happen here.

We learn from a series of flashbacks that Ben Blaine instilled his own implacable coldness in Adam and got the same resistance Ben’s father received from him. Rather than cold-cocking the old man, Adam removed himself from the familial combat arena, transferring to the world of political intrigue and danger.

The story gets very Vineyard, including zingers about the summer celebrity set — Celebrity Pac-Man, Adam’s girlfriend dubbed it — and a hilarious Ben Blaine line about the late and evidently unlamented Lillian Hellman, a real-life literary doyenne here for decades.

Mr. Patterson has a good eye for the Island. The cast includes a Dukes County DA who really likes son Teddy for Dad’s death, a good-guy Island cop having hard times at home, struggling artists and writers, and a menage of shrinks and lawyers. Mr. Patterson knows the Island’s zeitgeist, its roads and byways, and its people. He put us in scenes with people drawn so believably that you can almost put Island names to them.

Adam’s got a lot of “he-saids” and “she-saids” but not a lot of facts to work with. He’s a spy, right? So he enlists the aid of CIA high-tech buddy Jason Lew (no, not our Jason Lew) and evades the courthouse surveillance system for a midnight break-in to photocopy the evidence. Then sleuthing follows more twists and turns than Middle Road.

Mr. Patterson appears to have staked out his own turf in the widening spectrum of the genre. His work is more thoughtful than the page-turning exploits, say, of Lee Childs’s terrific Jack Reacher series, which stars a psycho with a strong sense of justice.

You can treat Mr. Patterson’s work as a page-turner, but you’ll miss subtle touches. In this book, for example, Mr. Patterson names the family catboats after mythological legends that match the characters of the boat’s owners.

After reading a few Patterson thrillers, I’m coming to believe that this author is offering more than entertainment. Through his character development, we understand not just who the villains are but how they got that way. And in “Fall From Grace,” we see that we all learn to dance both as victims and as villains over a lifetime and that we will pass the dirge on unless we change the music.