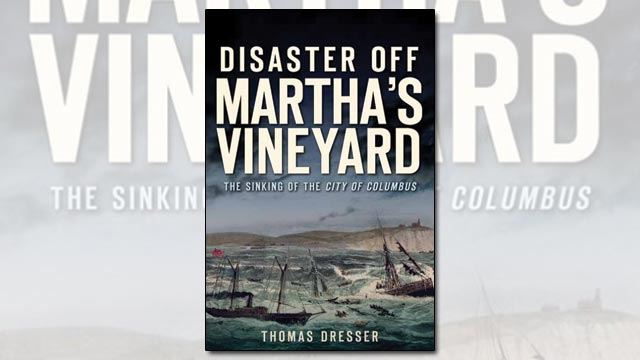 In the early hours of the morning on January 17, 1884, the passenger steamer City of Columbus ran aground on a rocky shoal about a half mile off the southern tip of Gay Head and quickly sank. One hundred and three people perished.

The widely publicized wreck was the deadliest New England maritime disaster of the 19th century. Less than 20 years later, the sinking of the Titanic eclipsed all other shipwrecks in the public eye, but at the time of the Martha’s Vineyard tragedy, the national media feasted on coverage of the tragedy, often in sensationalized accounts and illustrations.

Earlier this month, The History Press, a small publisher dedicated to historical accounts of local interest, released a new book titled “Disaster Off Martha’s Vineyard: The Sinking of the City of Columbus.” The 150 page paperback, richly illustrated with photos, was written by local author Tom Dresser of Oak Bluffs, who has previously published 10 books, mostly on historical subjects.

For those interested in local or maritime history, “Disaster off Martha’s Vineyard” provides a good deal of information about an all but forgotten incident that helped put the Vineyard on the map in the late 19th century. The story of a handful of Wampanoags whose bravery helped save the lives of a number of the 29 survivors, and the public’s honoring of these heroes add a good deal toward tempering the tragedy angle and give insight into the community of the day. Descriptions of the extensive rescue programs in place at the time demonstrate the danger of early sea travel and the thoroughness of public response.

In the prologue Mr. Dresser uses the technique of a fictional eyewitness description (based on actual survivor accounts) to open his book. This is an effective introduction. The rest of the book, divided into 15 chapters, is each dedicated to a different topic: The Ship, The Route, The News, The Retrieval.

Contradictions in survivors’ testimony have left historians confused about what definitively happened to cause the wreck. The tragedy was wholly preventable and was, by all accounts, due to human error. However, although it is made clear that either the captain or second mate was at fault, a quote from the quartermaster – the man at the wheel at the time of the wreck – makes it appear as if he disobeyed orders and followed a course contrary to the captain’s directive. The question of the course and of who was responsible for the tragedy is a crucial one in determining the cause of the accident.

Although the wreck was widely reported on in its day, a good deal of information has most likely been lost to time, and reporting was not as accurate as it is in the modern digital era. These factors, and the inconclusive results of the post-wreck investigation, probably account for inconsistencies in the book, but it’s unfortunate that Mr. Dresser didn’t offer an explanation for discrepancies, rather than just quoting contradictory sources.

There are also varying accounts of how many people were rescued in one of the lifeboats and different names given for one of the victims – a young boy who is described at some length. In the description of the conditions at sea and logistics of the land, lighthouse, etc, it would have clarified things had Mr. Dresser addressed the existence of a buoy marking the shoal. Some of the technical information will appeal more to the nautical reader than the popular one. Too, a map would have been extremely helpful to the reader.

The chapters containing eyewitness reports and, in particular, the one recounting the rescue efforts, are the most interesting. Others, such as one called The Omens, and especially one that details all of the ensuing lawsuits taken from legal documents, are less useful.

Also, of more interest to maritime scholars than the general readership, Mr. Dresser includes a seven page list of all the passengers and another two pages of the crew members with some brief biographical material. Through brief mentions, the reader discovers that both a Boston Globe writer and the Turkish counsel general were among those lost in the wreck. Either of these victim’s stories would have made for interesting copy. The author was most likely working with what he had available, and the passage of time probably accounts as much as anything for any omissions.

The Martha’s Vineyard Museum in Edgartown is currently hosting an excellent exhibit on shipwrecks that contains a treasure trove of interesting artifacts (pictures of many of them are included in the book) and helpful information. Mr. Dresser’s book is similarly a presentation of data available from the time of the accident, contemporary accounts, and colorful, descriptive snippets. This reviewer would have enjoyed seeing this material laid out with more cohesion.

The author’s previous chronicle of a newsworthy incident from the Island’s past, “Mystery on the Vineyard,” about the 1940 murder at the Rice Playhouse, is an evocative, insightful, and engaging book that serves as both a vivid snapshot of the life of the day and a compelling story. Other historical accounts by Mr. Dresser, including his two most recent books, “African Americans of Martha’s Vineyard” and “The Wampanoag Tribe of Martha’s Vineyard,” are full of helpful and interesting information.

The lure of reporting on a disaster of such magnitude, and one that had such an impact both locally and nationally, would prove irresistible to a local author. Mr. Dresser may have been hobbled by the dearth of available credible information, discrepancies in contemporary reporting, as well as a tendency by sources of the day to embellish the facts, but he made the best of what he had to work with.

“Disaster off Martha’s Vineyard,” the story of that dark and stormy night so long ago, is a cracking good – albeit sad – sea yarn.