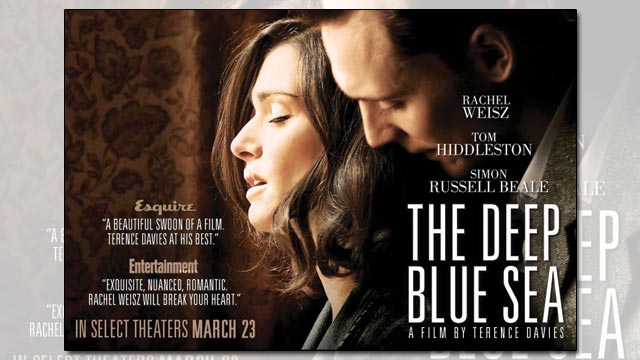 “The Deep Blue Sea,” coming to the Katharine Cornell Theatre at 8 pm on Saturday, June 9, deconstructs romantic love as we’re still too often taught to think of it by modern media. This powerful drama by British actor, director, and writer Terence Davies is part of the Martha’s Vineyard Film Society’s spring series. The movie’s title comes from the idiomatic phrase “Caught between the devil and the deep blue sea,” suggesting an impossible choice. Nautically minded Islanders may be interested to know that the phrase can also refer to the long seam on a ship that runs from bow to stern and puts the sailor who has to caulk it in a dangerous spot. The heroine of “The Deep Blue Sea” has clearly made her choice. Rachel Weisz, who won an Oscar for her performance as Tessa in “The Constant Gardener,” plays Hester, who has a loveless marriage as the wife of British judge Sir William Collyer (Simon Russell Beale) and falls in love with a Royal Air Force pilot.

Think of the last time you heard the name “Hester,” and you’ll be right on target. Hester is as much an adulterer as Hester Prynne in Nathaniel Hawthorne’s “The Scarlet Letter.” The difference is that the movie’s Hester has little remorse or ambivalence about her love for the pilot, Freddie Page (Tom Hiddleston), only a sense of high purpose. Once Sir William catches her talking on the phone to her lover after a scathing dinner with Sir William’s nasty mother (Barbara Jefford), Hester moves in with Freddie. If this love triangle is not so extraordinary, the way Mr. Davies sets up the story is. The movie begins with Hester attempting to commit suicide, apparently, we learn, because Freddie has spent the weekend playing golf and forgetting her birthday. There are no scenes of idyllic courtship to persuade us. The dark, yellowed lighting and mise-en-scene of “The Deep Blue Sea” reinforce the gloomy post-WWII atmosphere in the London of 1950. The camera lovingly pans over busy, patterned wallpapers, grimly dressed Londoners, and ruined buildings still not cleared away or reconstructed. Movie mavens will be reminded of two classic films. Vivien Leigh, who starred in “Gone With the Wind” – that landmark celebration of forbidden love – also played Hester in the 1955 version of “The Deep Blue Sea,” directed by Terence Rattigan, who wrote the play of the same name. Todd Haynes’s 2002 movie, “Far From Heaven,” evoked a similar buttoned-up 50s era but is set in the U.S. and includes a husband who turns out to be homosexual. Sir William simply seems to be asexual. Sentimental post-war tunes contribute to the atmosphere in “The Deep Blue Sea,” with bar room scenes of carousers crooning songs like “Molly Malone,” or the Jo Stafford hit, “You Belong to Me.” Steeped in the sense of nostalgia for a lost era, the movie foregrounds Hester as a woman determined to choose passion over accommodation, no matter what the consequences. Ms. Weisz’s face registers in its slow changes her determination to commit to the feckless, semi-alcoholic, jobless Freddie. Almost every other element of the film arbitrates against this romance-novel position. I suspect viewers will either detest or admire Hester and this movie, which so clearly rejects the kind of romanticism young girls are still spoon-fed. But there is little question that Terence Davies wields the tools of the medium masterfully to make his point.