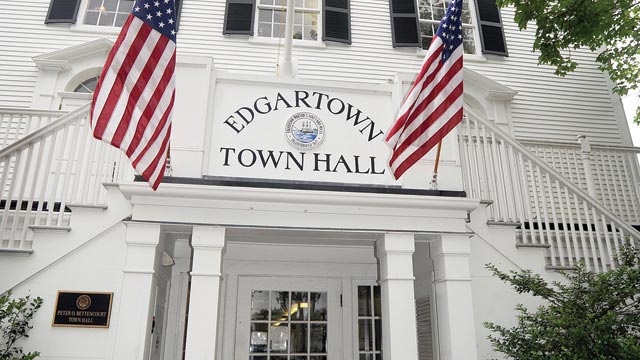 At their Monday meeting Edgartown selectmen fielded questions from teachers who questioned the financial support package for their new health insurance payment plan. They then clarified the town’s position on naming rights for the new library project.

Selectman Margaret Serpa said that since hearing about concerns from teachers, the town has arranged to offer gap insurance, and approved a flexible spending plan, where employees can fund an account with tax-free payroll deductions, to be used for medical expenses not covered by insurance. Other towns included those options in their plans.

Former town administrator Peter Bettencourt, who sat on the insurance advisory committee, said the options available to employees were voted by the committee. “You had representation at the meetings,” he said. “We assumed when you have representation to vote on the matter, we assume it was understood.”

All Island towns changed their health care systems in response to legislation approved by state government. After meeting with representatives of the various collective bargaining units, an insurance advisory committee appointed by selectmen proposed changes that shift more of the cost of health care insurance to employees. Selectmen approved those changes, and the changes take effect July 1.

Part of the process involved earmarking 25 percent of the savings that towns realized through health reform to offset any increased employee costs.

In Edgartown, the committee chose a “premium holiday” of 1.5 months. Next January and half of February, employees will not have payroll deductions taken out of their paychecks for health insurance.

In Edgartown, town employees now have four plans to choose from, ranging in cost from $378 to $449 monthly, representing 25 percent of the total premium. The town pays 75 percent of the premium.

When the health care reforms take effect, employees will have the same four plans to choose from, but the costs will range from $411 to $496. The plans also introduce deductibles and co-pays for some medical services.

Another point of contention came over a change in the town’s payroll system.

“We’ve been asked to do direct deposit instead of getting a paycheck,” said Deborah Orazem, a teacher. “I was wondering why that is mandated.”

“We’ve changed who processes the payroll, and that’s one of the requirements,” Ms. Serpa said.

“It’s the employees’ money that’s coming to them,” Ms. Jones said. “They have a right to decide how their money is coming to them. We’re not even sure that’s legal.”

The teachers and selectmen agreed to a plan for better communication in the future, including an email list to notify teachers of any changes that may affect benefits.

Also Monday, selectmen responded to a request from the library board of trustees, which asked selectmen to review a draft policy for accepting gifts and offering naming opportunities to private library donors.

In a letter to the trustees, selectmen wrote, “On September 26, 2011, the board of selectmen voted to adopt internal control procedures for adhering to (state law). These procedures were reviewed by the town auditor, town counsel, town administrator, and the town accountant. The board does not have a problem with your donation policy as long as the town policy is attached to it and adhered to.

“At this time the selectmen do not wish to entertain any policies regarding naming rights.”

The Edgartown Library Foundation, a private nonprofit group that raises funds for the library, has pledges in hand for a previous library project, and wanted to clarify whether it could offer naming opportunities to old and new donors. Under the draft policy, donors who gave $25,000 would be entitled to have a room or library area named after them, with approval of the trustees and the selectmen.

“We were not receptive to the naming policy,” Ms. Serpa said.

“That was clear,” library foundation president Susan Cahoon said. “Please remember that these are taxpayers and most of them have been very generous to the library over the years with really no thanks or recognition.”

Selectman Art Smadbeck said there is a disconnect between the private foundation and the town, though he acknowledged new leadership in the foundation.

“This money that was donated was not donated to the town, it was donated to the library foundation,” Mr. Smadbeck said. “Your predecessors sat here and said we have $1.5 million in donations. We haven’t seen any of that money. I think it’s putting the cart way before the horse to talk about naming things in a town building by a private organization that hasn’t donated the money they’ve got, or said they were going to donate. For now, we’re saying we’re not going to address that, which is a whole lot better than what I think you were expecting, which was ‘No.'”

Town officials expect a state grant to cover $6.4 million of the estimated $11 million library project. In April, voters overwhelmingly approved a Proposition 2.5 override question authorizing selectmen to borrow $4.9 million to finance the rest of the project.

Ms. Cahoon noted the foundation has pledged $175,000 for the new library project, and has other pledges that donors may extend to the new project.