The term “climate change” has largely supplanted “global warming,” because the consequences of too much carbon dioxide in the atmosphere will include altered patterns of drought and flooding, changing tracks and intensity of storms, and re-directed ocean currents — as well as just a higher average temperature for the planet. But more heat will be part of our future, and warming is a factor that will have (and indeed already is having) profound effects on the distribution of wildlife.

Each species of plant or animal has a range of temperature in which it can survive and successfully reproduce, and these limits partly determine where a particular species is found. In particular, for insects, cold winter temperatures often define the northern limit of a species’ distribution: above a certain latitude, the average winter is simply too cold for the species to survive. But as winters grow progressively milder, many insects will expand their range to the north, taking advantage of new areas where they can survive.

Over the past year, a striking example of this process culminated in my yard in Oak Bluffs, with the apparent establishment of a small colony of a southern butterfly known as the Sachem. Twenty years ago, the Sachem, essentially a subtropical species, had never been found in Massachusetts; today, it is on the cusp of establishing itself as a permanent resident of the Bay State.

Less than an inch long, a Sachem is easily overlooked. But the species is mainly orange and both sexes (which differ dramatically from each other) show highly distinctive markings. The core of its range stretches from the southern U.S. through Mexico and into South America, and in much of this vast area, the Sachem is a common butterfly that is active year-round. It has a shorter season farther north, expanding its range each year up the East Coast into the DelMarVa Penninsula and southern New Jersey. Late-summer strays have always occurred north of this region, and in recent decades, Sachems in the New York City area became an annual event.

Butterfly observers noticed that the limit of overwintering by this species seemed to be creeping northward, setting the stage for strays or migrants to push farther up into the Northeast during the summer. So it was not much of a surprise when this subtropical insect finally made it to Massachusetts: in July 1995, two separate observers found Sachems on Martha’s Vineyard, adding this butterfly to the state’s checklist. And with dramatic speed, Sachems became an annual and apparently increasing visitor to the state. The vast majority of records came in late summer, generally involving widely scattered vagrants, and there were no clear indication that the species reproduced (let alone overwintered) in southern New England.

That has now changed. In late July last year, I found a female Sachem in my yard. This was a fourth record for the Island (a male had up turned at Quansoo in September 2005), and while I was delighted with the find, I didn’t consider it unusual. But in late September last year, I suddenly had Sachems all over the yard: as many as six individuals at a time, over a period of almost two weeks. While I hadn’t seen any eggs or caterpillars, it seemed probable that the female in July had laid eggs that matured successfully into the September individuals. This likely ranked among the first instances of Sachems successfully reproducing in the state.

But it got better! Early last month, another generation appeared in my yard, with a maximum of four individuals present over the course of about a week. Again, such a local concentration, with no evidence of an influx of Sachems into the region, almost surely resulted from local breeding – and also, since there was a winter between generations, of successful overwintering during the very mild 2011-2012 season. I’m optimistic that September will again bring a group of new offspring of this butterfly into my gardens.

I doubt this little colony will last long, though. A harsh winter, or even a mild one with a few extremely cold days, will probably prove too much for larvae or pupae of this butterfly to survive. But this is how the shift in insect ranges due to climate change will look: isolated colonies to the north of the current range will gradually become more frequent, occur closer to each other, and persist longer, until the Sachem has filled in a new region as a permanent resident.

We can predict other things about the local future of this butterfly. In our region, its caterpillars probably feed on crabgrass and red fescue, two non-native grasses associated with human disturbance. Sachems, therefore, when they are established here, will probably be a butterfly of settled or agricultural areas, not natural habitat. In a few decades, as a result of a changing climate, this elegant orange butterfly, once a mind-boggling rarity in Massachusetts, will almost certainly be a boring butterfly in Vineyard yards and gardens. 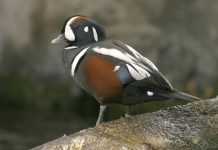