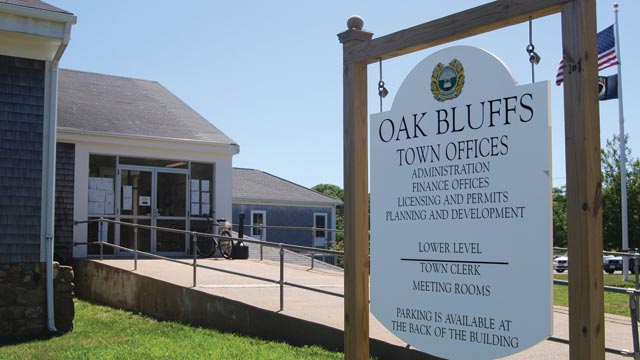 To address a budget shortfall and the need to persuade other towns to participate in funding, the Oak Bluffs selectmen agreed Tuesday that the land known as the Leonardo property, on Pennsylvania Avenue, will be reserved for use as a Little League baseball park.

At the annual town meeting in 2011, residents approved spending $200,000 in Community Preservation Act funds for the diamond project, but earlier this year, the town put the work up for bid, and the one bid submitted was for $205,773. After preliminary site work was completed, only $154,542 remains to complete the project.

On Tuesday, Phil Regan, an architect and member of the Martha’s Vineyard Little League board, proposed the town reach out to other towns on the Island to help fund the project.

“We intend on approaching the other towns about funding. We’re a regional entity, it’s a regional project.” Mr. Regan said. “We have enough people locally that are involved in the Little League and care about this.”

But town administrator Robert Whritenour worried that the towns would not commit funds for the project if the property is not dedicated for use as a baseball field. He said the property was originally designated at town meeting for wastewater treatment purposes and as needed for other town issues.

“Folks are asking if it’s going to be used as a ballfield for one year, or two years,” Mr. Whritenour said. “No one is going to invest the time or the effort to build a first-class Little League facility here if there is an intent right now to change the use of the property.”

Four of the selectmen voted to have the Little League use the facility. Selectmen Gail Barmakian abstained from voting.

Selectmen discussed whether to keep parking on Sea View Avenue Extension, along the North Bluff, diagonal, or change it to parallel parking.

Ms. Barmakian said diagonal parking is dangerous there and should be changed. “I don’t think it’s desirable, and we need to protect our residents,” she said. “Someone is going to get hit.”

Oak Bluffs resident Belleruth Naparstek told the board that her grandchildren were almost hit on the road last week. Her grandchildren, ages five and seven, were riding bicycles on the road when a car backed out in front of them. They were not injured.

What are the town’s priorities, she asked. “Is 15 parking spaces worth a kid’s life?” Ms. Naparstek said. “Because that’s what you’re dealing with.”

Chairman Kathy Burton said she isn’t comfortable voting whether to change the parking yet, but would like to change the speed limit.

“I’m down there three days a week,” Ms. Burton said. “I see people speeding down that hill all the time.”

She asked Oak Bluffs police Chief Erik Blake how the town could change the speed limit. He replied that the process would be long and possibly expensive.

The board agreed to consider the speed limit but defer a vote on the parking spaces.

The selectmen held a hearing to address a complaint of two pit bulls attempting to enter houses in Oak Bluffs.

At 1:30 am on Saturday, June 30, police Officer Dan Cassidy responded to a call of two pit bulls barking and scratching at the door of a house on Pond View Drive.

Officer Cassidy described the dogs in his report as growling, drooling, and foaming at the mouth.

Officer Cassidy called Jennifer Morgan, assistant animal control officer in Edgartown, for back up. She was able to get both dogs into her vehicle, and read the tags of the younger, less threatening animal, and called their owner, Cilas Batista.

Within a month, the dogs were out again, scratching at another person’s door, this time on Tower Ridge Road.

Mr. BenDavid responded to the second incident as Ms. Morgan had, and called Mr. Batista.

For each incident, Mr. Batista received a ticket.

He wasn’t at the hearing Tuesday evening. The selectmen wanted to know whether he received notification of the meeting.

On the recommendation of Mr. BenDavid, the board ordered the two dogs muzzled when outside, a fence built around Mr. Batista’s yard, and a $200 bond for each dog.

Hans Von Steiger, Oak Bluffs wastewater commission chairman, told the selectmen that young people are breaking into the Oak Bluffs Senior Center to use the restroom facilities and drink from the water fountain.

Ms. Burton said the matter should be handled by the police, not the selectmen.