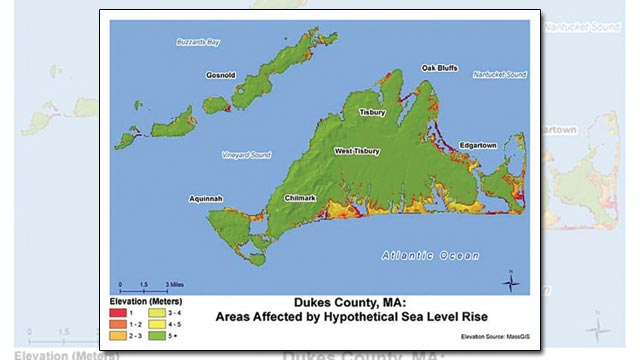 During the summer, Martha’s Vineyard is a vacation oasis for visitors. For a Connecticut student, summer was an opportunity to study climate change.

Jonathan Pollack, a recent graduate in geography from the University of Connecticut, wrote his thesis, titled, “An Integrated Approach for Developing Adaptation Strategies in Climate Planning: A Case Study of Vulnerability in Dukes County, Massachusetts,” on the rising sea levels and changing climate of Martha’s Vineyard.

His interest in the Island began when he was an intern for two summers with the Martha’s Vineyard Commission while he was an undergraduate at the University of Mary Washington, in Virginia.

Mr. Pollack spent the summers using geographic information systems (GIS), a program which combines mapping land and water with collecting data on what is within the area. With data generated by GIS, researchers can study what effects on the area are natural and what are caused by human use.

For his master’s thesis, Mr. Pollack looked at the effects that climate change could cause over the next half century. He focused on which areas and towns will be most vulnerable to rising sea levels and natural disasters.

Currently, he said the rise in sea level is relatively low, with the level rising two to three millimeters per year, in years to come the rate will increase.

“Climate is not a static phenomenon and, over the next 40 years, the climate in New England is predicted to change,” Mr. Pollack said.

Rising sea levels would also allow storms to cause more destruction. “In the case of Duke’s County, the most critical hazards are long term sea level rise, a chronic hazard, and storm surge events such as tropical cyclones and nor’easters,” he said.

In the worst-case scenario, if a category 4 hurricane were to hit, 19 percent of the county would be affected. For reference, Hurricane Bob was a category 2 when it hit New England in 1991.

Certain areas are more vulnerable than others. “Overall, Chilmark, Edgartown, Gosnold, and West Tisbury are at risk of losing the most land to sea level rise,” Mr. Pollack said.

These towns are more at risk, he said, due to lower elevation, and the composition of the areas. “The land types that are most affected by rises in sea levels are sandy beaches, wetlands, and forests,” he said.