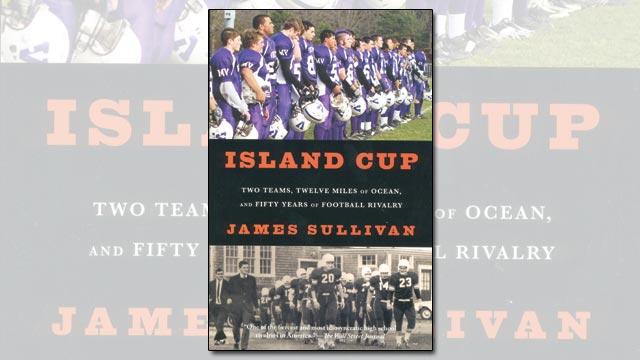 “The Island Cup” is not a football book, though it is a book about football. Author James Sullivan has written a definitive book on island cultures through the prism of high school football on Martha’s Vineyard and Nantucket.

The two Massachusetts island high school teams play on the Saturday before Thanksgiving each year. The winner gets a year to keep a trophy that was worth $102 brand new.

Mr. Sullivan will speak about “The Island Cup” at the Vineyard Haven Library author series on Tuesday, Sept. 11 at 7 pm.

His work explains the powerful role high school football plays in isolated communities. And that rings true on islands out in the Atlantic ocean, in West Texas scrub patches, and in inner-city neighborhoods. The common thread is they are all islands and what they have is each other. And that it’s enough.

Perhaps that explains why either Nantucket or Martha’s Vineyard won their Mayflower League championship every year in the 1990s and how schools with small male enrollments, like South Boston High School, won the Boston City League title every year for a couple of decades under legendary hard-ass Joe Crowley.

Texas towns without enough population to field 11-player teams have six-player leagues and still fill the stands on Friday night.

Island football is not big-time football. If Martha’s Vineyard coach Don Herman or Bill Manchester on Nantucket have a 260-pound lineman, they run the offense behind him. In the off-Island Catholic Conference, offensive lines can average 260 pounds. The Catholic Conference has produced at least three NFL quarterbacks in the last 20 years. Nantucket’s Beau Almodobar, who played three games with the New York Giants, is the only NFL player from the islands.

Size and style is not the point Mr. Sullivan is making in this book. “It’s got tons of football in it, but that isn’t the way I approached it,” he said in a telephone interview this week. “I saw an opportunity to look at the islands off-season, after the summer crowds have left.

“‘The Island Cup’ is a symbol of what it means to be an islander, sticking it out all winter. Football was the way in to look at what defines the community.”

The book does have a lot of football in it. If you played for either Island in the past 50 years, you’re probably in it or know players who are.

Mr. Sullivan’s research punctures the pop image of two communities populated by the idle rich. Not in winter. After Columbus Day, the majority of year-round residents are neither idle by choice nor rich. They live in a bipolar world of summer overcrowding followed by winter’s isolation.

Mr. Sullivan cites the effects on families on both islands. There is a tendency for local media to gloss over locals’ bad behavior, but Mr. Sullivan writes a candid out-of-towner’s view of what he sees. “Sadly that is part of the culture and part of the story. How to deal with isolation. Before the jet-setters came, [the islands] were even more isolated,” he said.

One of the more delightful aspects of this read is the point-counter point of the warring coaches.

“Vito loved playing the bad guy and it made it easier to vilify him, but a lot of people still think of him as the mayor of Nantucket,” Mr. Sullivan said. “Vito and Don profess to hate each other, but Don may also be like a younger brother to Vito. I believe Vito was glad Don showed up. He finally had what he considered to be a tough, worthy opponent.”

“The Island Cup” also carefully recounts Nantucket’s struggle to maintain its football program. After dominating the Island Cup and statewide opponents in Super Bowl games in the 1990s, Nantucket found itself with only 17 players five years ago. The Island Cup game was canceled in 2009.

Mr. Sullivan credits then-coach John Aloisi with saving the program. “For a team that didn’t know if it could survive to come back and win a Super Bowl two years later is an amazing story,” he said last week. In the epilogue to his book, he notes that 55 kids signed up for Nantucket football in 2011.

Mr. Sullivan did the reporting, combing through years of games and stories after interviewing coaches and players to determine the most important and exciting games, regular season and Island Cup games. “Ken Goldberg, the Vineyard PA announcer, was enormously helpful,” Mr. Sullivan said. “He provided broadcast tapes for a lot of games.”

The Island rivalry has been a fascinating topic for national media for decades. Sports Illustrated, The New Yorker, the now-defunct sports daily newspaper The National, and television networks have all featured Nantucket-M.V. football.

“Yeah, the presence of media personalities as residents on both islands may have helped, but the story is exciting,” he said, noting that the success that these remote “schools that take boats to play football” have had add to the allure.

“The Island Cup” is Mr. Sullivan’s fourth book about life and times in America. “That’s why I don’t write fiction. You can’t make this stuff up,” he said.