As summer matures, so do caterpillars; butterfly time is here in gardens, meadows, and woodland edges. Insignificant while small, caterpillars enlarge and become far more noticeable when they pass through growth stages, called instars, and begin to move about looking for places to pupate. We really notice them as butterflies, though.

Some of these animals are colonial while larval, such as the orange-striped oakworm (Anisota senatoria), of which large groups are now prominently defoliating selected branches of oak, their preferred foodplant. (They are in the grouping of Imperial Moths, Royal Moths, and Oakworms. None sting.) Concerning damage to trees, David L. Wagner, in “Caterpillars of Eastern North America” (Princeton Field Guides, 2005), reassures that defoliation occurs so late in the season that effects are mitigated. Orange-striped oakworms are found presently on hickory, maple, or birch, or just about any Island tree.

The heavyweights of the caterpillar world are the tomato hornworms and infrequently seen caterpillars of the Buck Moths and Giant Silkworm Moths. These are weighty presences indeed. A recently observed, crawling Achemon sphinx caterpillar was easily 8 cm.

The bristly caterpillar pictured, the larva of the spectacular Io moth, Automeris io, was approximately 7 cm long. The specimen suddenly appeared among the leaves of a Siberian iris — hard to miss. The bristles are poison-filled spines that deliver a painful sting. If sighted, leave alone and do not handle.

Worried that my dog might eat it and suffer the consequences, I scooped it up and took it to some nearby sassafras saplings, an Io moth caterpillar foodplant. It was half a day later that I realized that Garden Notes should have an image of the impressive creature. When I recovered it, the caterpillar had not moved very far at all and was apparently content gnawing upon a sassafras leaf.

According to a pdf bulletin from Ball, Impatiens Downy Mildew (Plasmopara obducens) is a destructive foliar disease of Impatiens walleriana that is capable of causing complete defoliation or plant collapse, especially in landscape plantings under cool, moist conditions. Commercial growers are being urged to curtail severely or cease production of Impatiens walleriana in the coming 2013 season, in order to contain the problem.

All cultivars of Impatiens walleriana (common garden impatiens) and interspecific hybrids with an I. walleriana parent are susceptible. New Guinea Impatiens (I. hawkeri) cultivars, such as Fanfare, Divine, Celebration, Celebrette, and Sunpatiens, are highly tolerant to this disease, however. While cuttings and plug material are capable of transmitting P. obducens, it is thought that the disease is not seed-borne.

Currently begonias and coleus are the only plausible fall-back plants. In addition to the bulk growers’ sales affected, this situation further confronts millions of home gardeners, as well as professionals: what to use for color in those shady, difficult areas? Our over-dependence upon impatiens is total!

If you want to utilize impatiens in your planting plans next season, it might be a good idea to take your own cuttings of plants you have now, as long as they are disease-free. There may be none for sale. Search on the internet “Images: Plasmopara obducens,” to learn to recognize the blight. Do not propagate diseased plants — you will only infest your soil with the pathogen.

It is customary, around Labor Day, to remove Christmas cacti (Zygocactus or Schlumbergera spp.) that have been summering outdoors, or in windows, to a darkened area to cause them to set flower buds. A period of about eight days with 16 hours of darkness at 61° F is thought to be about right to set flower buds on holiday cacti. Then they should be on target to be loaded with bloom for the holidays.

In the case of amaryllis (Hippeastrum), there is a misconception that they need a period of total darkness before they bloom again. According to information from the Internet and various print sources, this is not true. They need a rest period, under average light, in cool temperatures, about 45 to 60°F. A shaded porch might be good.

Most Hippeastrum need a rest period with light monthly watering of at least six weeks, although others may require as long as three or four months. Often the plant will send up a flower spike or leaves when it is ready to resume growing, in which case put it in a sunny window and water it once. A bulb that has not begun growing on its own after the rest period can be brought out and watered once. Usually the warmer temperature, sunlight and water will prompt it to begin growing again.

Now is a good time to root prune and replace the potting mix of houseplants that have summered outside, since it is a messy job, and allows them a chance to recover in good outdoor light, before they are moved inside. Mix convenient slow-release granules into the potting mix if desired.

Island gardeners mourn the death last week of their colleague Michael Faraca, of The Avant Gardener. Michael was gentle, courteous, and helpful to fellow- and newbie-gardeners. He was known as skilled and hard-working, with a strong creative vision. Clients for whom he chose to work knew they were lucky: the gardens he created were both beautiful and impressively maintained. 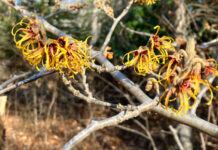