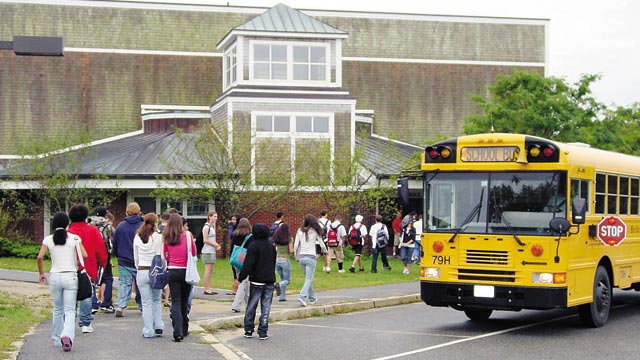 “Under the new accountability and assistance system in Massachusetts, all schools with sufficient data are classified into levels one to five, with the highest performing in level one, and the lowest performing in level five,” superintendent of schools James Weiss explained in a prepared statement he emailed to The Times. “The Martha’s Vineyard Public Schools [MVPS] are pleased that all of our schools were identified as level one.”

According to an ESE press release about the 2012 MCAS results, 503 schools statewide were classified as Level 1 for meeting all of their performance benchmarks.

Determination for the five school levels in Massachusetts were based on data reported in two categories, one for “all students” and one for a newly designated “high needs” group. It includes students categorized in least one of three subgroups, which are low income, students with disabilities, and English language learner/former English language learner.

This was the first year Massachusetts reported data using a different method. A flexibility waiver granted by the U.S. Department of Education exempted the state from some provisions of the No Child Left Behind (NCLB) law. New reporting features include a unified system of accountability and assistance levels for all schools, a goal to reduce proficiency gaps by half by 2017, and a new performance measure that incorporates student growth and other indicators, the ESE press release said.

“I congratulate students and educators for the progress we have seen over time in schools across Massachusetts,” ESE Commissioner Chester said at the press conference. “The state’s flexibility waiver was an important change that allowed us to recognize improvement in student performance and growth over time where the federal NCLB system did not. Our state system establishes a high bar for performance while setting accountability goals that are attainable.”

“We are thrilled that the West Tisbury School is in the ninety-sixth percentile,” MVPS assistant superintendent for curriculum and instruction Laurie Halt said in a phone call with The Times on Wednesday.

The new accountability system reports a school percentile for schools with at least four years of MCAS data. The number indicates a school’s overall performance in narrowing the proficiency gap, based on its own targets, relative to other schools that serve the same or similar grades. Edgartown School is in the 85th percentile, Oak Bluffs in the 87th, Tisbury in the 78th, and Martha’s Vineyard Regional High School (MVRHS) in the 49th.

“We’re also thrilled that in Oak Bluffs in every grade and every standard, students performed at a greater percent correct than students throughout the state,” Ms. Halt said. “And we’re happy that in the new system schools get extra credit points for moving students into the advanced category. That benefited us tremendously. It’s interesting when we look at the performance data and see in many areas low-income students are scoring advanced. It’s fascinating to see the progress and gains being made.”

At the Charter School, Mr. Moore said, “The percentage of advanced scores increased in English Language Arts, Mathematics and Science from 2011. Students continue to do well in ELA throughout all grade levels in the school, he noted, with 81 percent scoring proficient or advanced.

In math, 17 percent of all students scored advanced.

“The school will look closely at the Mathematics results, specifically in grades 4-7, and determine trends in curricular areas that are to be addressed and strategies that are to be implemented in helping students in their mathematics understandings,” Mr. Moore said.

Last year, after assessing its math program, the Charter School decided to adopt the Singapore Math curriculum starting in the 2012-2013 school year, he added. “The school continues to pay close attention to the mathematics program,” Mr. Moore said.

In February Massachusetts was one of the first ten states granted a flexibility waiver by President Barack Obama, which eliminated the Federal provision of the NCLB law that requires all students to be proficient in reading and math by 2014.

Instead, the state set a new goal to basically cut in half the number of students who are not passing the MCAS by the 2016 to 2017 school year, according to ESE Commissioner Chester.

The flexibility waiver allows states to provide an alternate plan that would set up new targets to improve all students’ achievement, prepare children for college and careers, reward the best performing schools, and provide help and resources to the ones doing the worst. Students will still be tested annually in states granted a waiver. But starting this fall, schools in those states will no longer face the same punitive actions spelled out under NCLB.

One of the biggest changes in the state’s approved flexibility plan is the elimination of Adequate Yearly Progress (AYP), which was replaced with a new performance measure, the Progress and Performance Index (PPI).

In the past, MCAS scores were used to figure a school’s AYP. The NCLB law required states to raise the bar each year for how many children must pass the tests, making the federal target more difficult to attain.

Under the new system this year, instead of AYP, DESE used the new 100-point PPI to report district and school progress towards narrowing proficiency gaps in ELA, math, and science, and student growth in ELA and math. Each school has a target for progress and growth.

Points are awarded on a 100-point scale. A school with 100 points is above target, 75 points on target, 50 points improved target, and 25 points, no change. Each district or school will receive both an annual PPI and cumulative PPI.

The ESE also uses Student Growth Percentiles (SGP) to measure how a group of students’ scores on ELA and math exams has grown or changed over time. All groups, including districts, schools and subgroups, are expected to demonstrate growth in student performance.

Under NCLB, accountability status labels identified schools in need of improvement, corrective action or restructuring. Schools that did not demonstrate AYP for two years faced increasing penalties, including having to offer a school choice option where children would be bused to high-performing schools, offering tutoring to every student, and replacing staff.

The state’s new system did away with the NCLB accountability status labels that identified schools in need of improvement, corrective action or restructuring. Schools that did not demonstrate AYP for two years faced increasing penalties. Under the flexibility waiver, there are not hard and fast consequences as there were under AYP. School districts will be able to propose their own supports and interventions.

Levels 4 and 5 include schools with the greatest needs. Currently there are 43 Level 4 schools in 12 districts and no Level 5 schools.

One of the “carrots” for schools under the new accountability system is recognition as a Commendation School for high achievement, high progress, and/or narrowing proficiency gaps, the ESE press release said.

This article has been updated to correct school percentile numbers for Edgartown and Oak Bluffs, which were transposed in the print version published September 20.