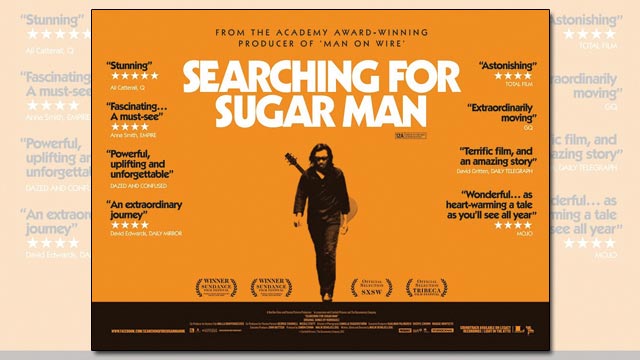 “Searching for Sugar Man,” the haunting documentary about a talented singer who had a near miss at the big time in the 1970s, returns to the Martha’s Vineyard Film Center this weekend.

The subject of “Searching for Sugar Man,” Detroit-based singer Sixto Rodriquez, was hailed at the time as a new Bob Dylan. After release of two albums that never caught fire in the U.S., Rodriquez — he dropped his first name — disappeared into obscurity. That was not the case in South Africa, where his music inspired an anti-apartheid generation and he became a cult figure launched into bootleg success.

Because Rodriquez seemed to vanish without a trace, rumors persisted that he had shot or immolated himself onstage. Fast forward to 2012 and “Searching for Sugar Man.” Swedish filmmaker Malik Bendjelloul collaborated with two South African music producers to separate myth from fact and track down what happened to Rodriguez. They discover the singer very much alive, living in Detroit and working as a laborer. Rodriquez returns to Cape Town, South Africa, and performs before sold-out audiences.

Part of what makes his story so affecting is the singer’s zen-like attitude toward his close call with fame and fortune. In the years since his South African success, he earned a college degree in philosophy, raised three daughters (no wife is mentioned in the film) and remained committed to solidarity with the working class.

The film incorporates soundtracks of Rodriquez’s soulful songs with their hard-hitting lyrics about urban protest and drugs. The caliber of the music speaks for itself, making a statement about the mystifying arbitrariness of popularity and fame.