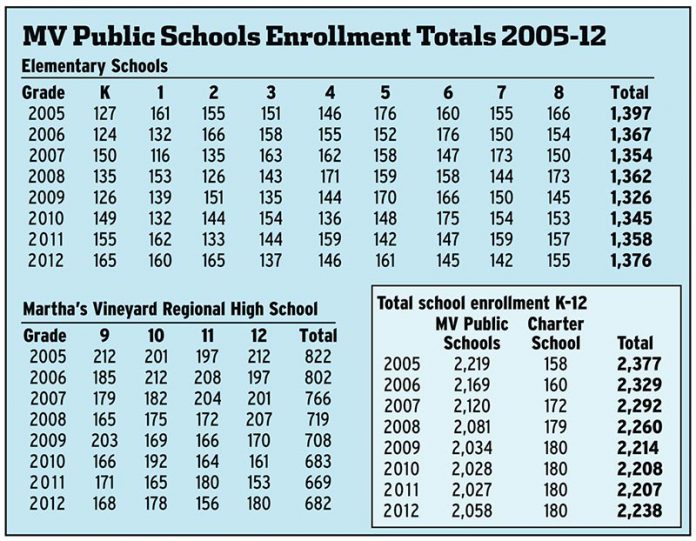 Enrollment is up slightly this year in Martha’s Vineyard Public Schools (MVPS), according to a student census taken October 1. There is an increase of 31 students, for a total of 2,058 students attending town elementary schools and Martha’s Vineyard Regional High School (MVRHS), compared to 2,027 in 2011.

“We remain relatively steady with only a few more students this year than last,” MVPS superintendent James Weiss said in an email response to an inquiry from The Times. “We do see a larger kindergarten than we had previously and await the enrollment projections from NESDEC [New England School Development Council] that we should receive in early January.”

Among the K-12 grade levels, the second and 12th grades show the biggest increases. There are 32 additional second-graders this year and 27 more 12th-graders, in keeping with big first grade and 11th grade classes last year.

The number of kindergartners this year increased by 10 students to 165, outranking last year’s total of 155 as the highest since 2005. Tenth grade showed the biggest decrease, down by 24 students from 2011.

Enrollment at Martha’s Vineyard Public Charter School is 180 students, as capped by the state. The Charter School’s funding is limited by the state to a specified percentage of each Island school district’s net school spending, which allows for a certain number of students from each town.

In looking at enrollment in relationship to school budgets, for fiscal year 2013 (FY13), 1,060 students are enrolled in Edgartown, Oak Bluffs, and Tisbury schools. The operating budgets total about $17,664,673 (not including benefits, insurance, and payroll obligations for staff, or debt).

For the 316 students enrolled in the Up-Island Regional School District, the combined FY13 operating budgets for the Chilmark and West Tisbury schools total about $6,636,066 (including benefits and building insurance, but not general liability insurance, payroll obligations, retirement, capital costs, transportation, or debt reduced by general fund revenue).

The regional high school has an enrollment of 682 and an FY13 operating budget of about $16,910,431 (including payroll obligations, transportation, benefits, insurance, capital costs, and debt reduced by general fund revenue).

The Charter School has 180 students and an FY12 budget of $3,700,000 (including benefits and insurance). Charter schools receive per-pupil allocations from the state only for operational costs and must rely on private fundraising for capital improvements, building and site fees.

The state Department of Elementary and Secondary Education requires schools to conduct a census on October 1. Enrollment numbers are used in calculations for funding and to determine town assessments.

As a guideline for future enrollment trends, Superintendent Weiss receives projections prepared for the MVPS by NESDEC.

Enrollment projections from NESDEC for the 2011-2012 school year and beyond from NESDEC dated January 9, 2012, predicted enrollment in Martha’s Vineyard Public Schools would remain at around 2,100 students. The study forecast that enrollment at MVRHS will likely undergo slight, slow, but steady growth annually over the next five years, and that the elementary schools are expected to level out.

NESDEC, a not-for-profit educational organization, provides enrollment projections as a service to its members. Mr. Weiss said that NESDEC updates the Island schools’ enrollment projections annually using the Cohort Survival Model, which is modified with additional information provided by his office, including the number of live births to residents, housing starts, and the October 1 school census.