East Chop late Sunday afternoon was not pleasant. Sleet rattled on my jacket, driven by a biting east wind. A hefty swell slapped the foot of the bluffs, still showing signs of their pummeling by the storms earlier this fall. The water and the sky were an unfriendly gray, and aside from the waves and the bushes twitching in the wind, little moved. You know: seabird weather.

Offshore, perhaps 500 yards out, I spotted what I had come looking for: a half-dozen black-and-white birds, each about a foot long. Eyes watering from the wind, binocular lenses spattered with raindrops, I certainly took probability into account in identifying them. But I could see enough: chunky bodies, a thick bill at one end and a pointed tail, raised into the air, at the other. Razorbills.

One after another, the birds flipped momentarily into the air and dove, spreading their wings as they went under. The move was typical of all the auks, or alcids: a family of seabirds, primarily high-latitude breeders, all finely adapted to life on forbidding ocean waters. Unlike loons, grebes, and diving ducks, which propel themselves with webbed feet under the water, auks use their wings to “fly” while submerged. Indeed, they’re more at home in the water than in the air, where their fin-like wings beat frenetically to keep their stout bodies aloft.

Depending on the species and the conditions, alcids may dive as deep as 100 feet and stay submerged for a minute or more. While watching them, I’m constantly amazed at how much distance they can cover in the course of a single dive; a razorbill can easily pop up 50 yards from where you expect it. Combine such mobility with some chop and some whitecaps, and it becomes mighty hard to keep track of one of these birds.

Six auk species breed in the northwestern Atlantic and hence occur with some regularity in our waters. All six show the familial characteristics of a chunky body, a black-and-white color scheme, and complete adaptation to a maritime lifestyle. Of the six, only the razorbill approaches commonness within sight of the Vineyard, and even this species avoids land and is usually viewed at artillery range. Atlantic puffin (famous for its parrot-like beak), common and thick-billed murres, black guillemot (actually mostly white in the winter, with a prominent white patch on each wing), and dovekie (like a fat, black-and-white, stubby-billed starling) are all possible but rare here, spending most of the winter to the north and east of us, showing up most often in association with storms.

So far, this season looks auspicious for alcids. Razorbills, as usual, are scattered but reliably present within sight of land, if you can find the right place to look for from. (Gay Head and East Chop are classic lookouts for this species.) Several reports of dovekies, the smallest of our alcids, have come from observers on the ferry; and Chilmark birder Allan Keith recently nailed a thick-billed murre from the boat as well. Now through mid-March is the season for these birds. If you go looking for them, patience, powerful optics, and an elevated vantage point are your friends.

Breeding in colonies on sea cliffs mainly far to the north, these birds are winter specialties at our latitude (though, bizarrely, non-breeding razorbills have lingered at Menemsha into several recent summers). Given their habits, it seems probable that all of these birds routinely spend months over the winter without setting foot on terra firma. Instead they follow their prey — mostly small forage fish for the larger species, large plankton and invertebrates for the tiny dovekie.

These habits make the movements of alcids irregular and hard to predict. In an interesting development, razorbills are currently staging an unprecedented incursion into the deep south, turning up by the hundreds off the east coast of Florida, where any alcid sighting is ordinarily a hotline item. One wonders what this unusual movement says about the distribution of forage fish, and by extension, what it portends for the larger fish, like striped bass and bluefish. Like the razorbill, these depend on herring, menhaden, and sand eels.

Though they’re hard to find and even harder to get a good look at, I’ve always had a fondness for the auks. These are unequivocally wild birds, wary and distrustful of land unless it’s a bare rock to nest on. Their movements are governed by a profound, if instinctual, understanding of the ocean. Despite their small size, waves don’t perturb them; they strike me as among the hardiest, most untamed of our avian visitors. I value them because they are perfectly formed for a life that passes my ability to imagine. 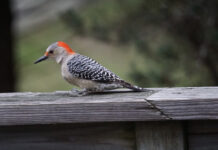