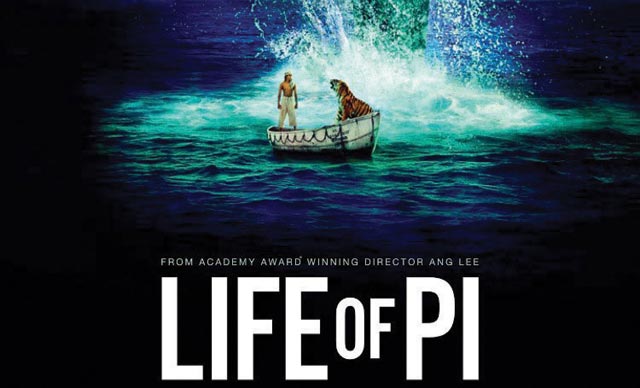 With magic realist artistry, “Life of Pi” tells the story of a shipwrecked teenager and a Bengal tiger sharing a lifeboat. While stylistically less miraculous than “Pi,” “The Fitzgerald Family Christmas” injects fresh comic life and sophistication to a well-worn holiday genre.

Ang Lee, one of Hollywood’s most talented directors, has transformed Yann Martel’s prize-winning novel, “Life of Pi,” into a tour-de-force of filmmaking. Piscine Patel, played by four different actors during the course of this multi-layered film, grows up in a family zoo in South India’s picturesque Pondicherry.

Filmgoers first meet Pi — the nickname Piscine adopts to avoid teasing — as an adult (Irrfan Khan) narrating the story of his shipwreck to a mesmerized Canadian writer. This narration serves to frame the rest of the story. As a precocious child (Gautam Belur and Ayush Tandon), Pi develops a fascination with religion, exploring and to a degree embracing Hinduism, Christianity, and Islam. The film introduces Pi’s spiritual bent with a lightness that seems appropriate for a child. Yet faith will deepen the story as it unfolds.

Pi’s epic maritime adventure begins in his teenaged years (Suraj Sharma) once his parents sell their zoo and begin a move to Canada. The boat they are traveling on is shipwrecked, and Pi finds himself sharing a lifeboat with a zebra, an orangutan, a hyena, and a Bengal tiger. After watching the tiger, fancifully named Richard Parker, devour the other animals one by one, Pi realizes he must devise a way to protect himself and survive.

Pi’s methods are ingenious, and over the course of the 227 days he and the tiger are lost at sea, the two develop a relationship and mutual respect. The story is enriched by operating on a complex series of levels, which viewers must sort out by themselves. For instance, Richard Parker is an almost entirely character-generated creature, a remarkable feat that demonstrates the power of film to seem real.

The cinematography of “Life of Pi” is breathtaking and inventive, especially considering that most of the movie is confined to the lifeboat and a raft Pi constructs to protect himself from the tiger. This remarkable movie is a certain candidate for Oscars.

The title of “The Fitzgerald Family Christmas” reflects its more mundane suburban setting for a more familiar story about a large, dysfunctional Irish Catholic family getting ready to celebrate Christmas. Rosie (Anita Gillette), with a grown-up brood of seven children and an estranged husband who walked out 20 years ago, is going to celebrate her 70th birthday just two days before Christmas.

The only one to show up for the big event is the oldest sibling, Gerry, played by director/screenwriter Edward Burns, who lives with Mom and runs the family tavern. To make matters worse, Dad (Ed Lauter) wants to spend Christmas with the family he abandoned. Malachi McCourt makes a cameo appearance as the family priest, and Connie Britton of “Nashville” plays the level-headed nurse whom Gerry romances.

One by one, Gerry’s siblings are introduced, along with their various problems. Dottie (Marsha Dietlein) is trading in her husband for the gardener’s son. Sharon (Kerry Bishe) has hooked up with older, rich FX (Noah Emmerich). Erin (Heather Burns), who seems to want nothing to do with her family, has a Jewish husband and a baby that Rosie is determined to have baptized. Brother Quinn (Michael McGlone) has a much younger girlfriend he’s ready to propose to. Connie (Caitlin Fitzgerald) has an abusive boyfriend, and Cyril (Tom Guiry) just finished rehab for substance abuse.

It’s a big cast to keep track of, but director Burns juggles it smoothly. In one scene, he even has two siblings joke about not remembering which one did what when they were growing up.

Mom and her seven offspring line up on the issue of whether Dad can join them on Christmas Day. Their individual dilemmas keep things hopping, and this warm-hearted comedy never sinks into a gooey sentimentality. “The Fitzgerald Family Christmas” is definitely a keeper.