The Yard is in full-tilt boogie, a creative mass of excited particles — artists, staff, board, angel donors, and the mass of kids Jesse Keller teaches (well, wrangles) at the YMCA of M.V. We are moving mindfully between four decades of Patricia Nanon-founded legacy and a future out among the stars (emerging star artists, that is) where the ride will be exciting, thought-provoking, profound, and endlessly entertaining. Big ideas, serious joy — that’s how we ride in 2013.

2012 saw the launch of TapTheYard: A Vineyard Festival of Rhythm and Beats. Anchored by our own indigenous tapper (and deft Managing Director) Alison Manning, the Bang Group and Michelle Dorrance and Dancers blew the roof off the barn with a crew of remarkable percussive dancers. After an awesome debut with packed local workshops by master artists, The Yard expands TTY2 in 2013 into a two-week extravaganza, bringing back the stalwarts and adding such delicious movement artists as Boston-based tap diva Dianne Walker and IED (improvising explosive dancer) Derrick Grant, a protégé of Savion Glover.

2013 also embraces Rhode Island’s Everett Dance Theater, which brings the performing arts world’s equivalent of “Modern Family” to the Vineyard. Everett is both a company and a community founded by a mother, son, daughter, and now grandchildren (collectively, the Jungels), seemingly a bunch of neighbors, and a singular and diverse group of kids straight out of Providence who’ve been schooled in the theater and school that the family built in their backyard — literally. They parachute in with Brain Storm, an all-ages fantastic voyage into the mysteries of the brain, what makes it tick, what makes it transform and resurrect in the wake of traumatic injury and disorder, all tooled in a spectacle of theater, dance, and media. The company includes a brigade of contemporary artists including home hip-hop artists Case Closed led by Cambodian-American Sokeo Ros, a core Everett creator born in a Thai refugee camp.

Others rocketing into the Yard universe: Yard veterans Art Bridgman and Myrna Packer explore the steam and sensuality under the enigmatically cool surfaces of Edward Hopper’s world and paintings in the performance installation, Voyeur. Dan Froot and Dan Hurlin take on hunger and food deprivation in Who’s Hungry –- Santa Monica, to be presented in association with the Island Food Pantry and other Vineyard service organizations. Doug Elkins, of Fraulein Maria fame, cooks up a casserole of comedy and elegant dance-making in a Yard-created premiere. And new faces including a fabulous post-modern clown Mark Gindick, and witty young choreographers Faye Driscoll, Hari Krishnan, Deborah Lohse, and Donnell Oakley as The Yard finally fulfills its secret fantasy to be an old-world vaudeville house,

Believe it or not, there’s more to come, for all ages. So sign up for the email list at dancetheyard.org, and stay tuned for further news. It will truly be a Happy New Year at The Yard due to all those who have supported Yard revival.

David White, the artistic director of The Yard, is an accomplished choreographer. Among his credits is the leadership of the Dance Theater Workshop in New York from 1975 to 2003. 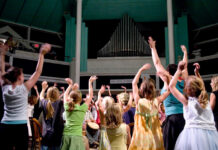 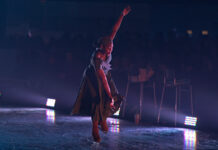 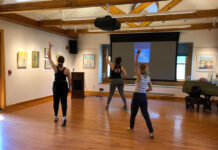